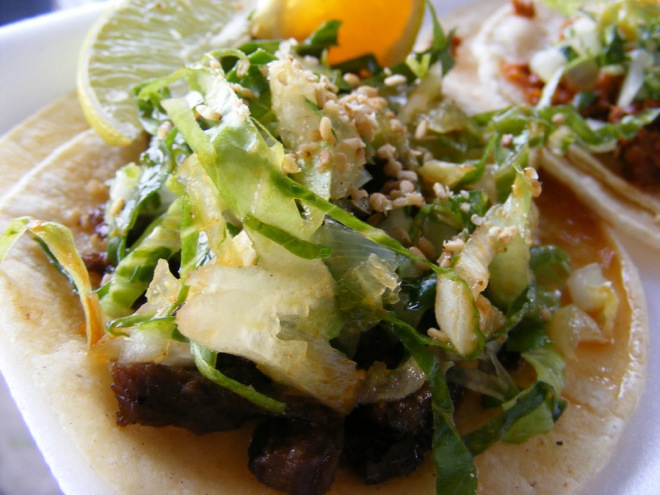 Over Thanksgiving, I spent a week in Mexico City, which, as always, was nothing short of amazing. Much of my time was spent at swap meets, street stands, and open air markets sampling the bustling street food scene in Mexico’s capital, all to the sounds of American music blasting from mobile pirate MP3 vendors. But, every hour, on the hour, no matter where I went—I kid you not—I heard PSY’s K-Pop anthem “Gangnam Style” soaring high above the rhythmic cries of street food vendors.

PSY may be taking over the planet with his tunes, but the OG Korean crossover into the mainstream still remains Roy Choi’s Kogi BBQ, which spawned countless imitators when it first rolled out back in the fall of 2008. Asian fusion tacos began springing up across L.A. and beyond, sweeping all the way to the East Coast, and now, it seems they’ve reached Latin America.

Chef Roy Choi calls himself “Papi Chulo” (pimp daddy) and “the Godfather.” And well, it’s best that we all bow down and acknowledge the simple truth that he’s absolutely justified in doing so. (Sorry haters, you’ll just have to keep on hatin’.) Just as surprising as hearing Gangnam Style throughout the D.F. was seeing how deeply Choi’s Korean fusion revolution has rooted itself into Mexico’s street food capital.

The “taco coreano” was the headliner at the Corredor Gastronómico, an incredible festival that touched on trends in art, design, gastronomy, and cinema in two of Mexico City’s hippest neighborhoods: Roma and Condesa.

Muto—a full on Asian-themed taquería set in the heart of the city’s beautiful Plaza Luis Cabrera—hosted the tasting of Korean and Vietnamese tacos, with an obvious nod to L.A.’s gourmet taco truck movement that was set off by the Godfather and his posse. It was great to see that Choi and the Kogi BBQ truck had inspired proud Korean-Mexicans and taco enthusiasts to embrace this hybrid cuisine.

“When you roll with Kogi, you roll deep,” Choi has said, and it gets no deeper in terms of street food cred than Mexico City. ¡Arriba los tacos coreanos!