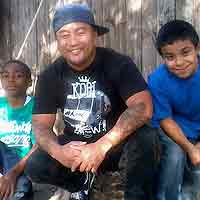 While most of the state’s chefs are busy fighting for the right to serve foie gras, one of our city’s most influential culinary minds is questioning everything. In a refreshing (if slightly bizarre) Jerry McGuire-esque blog post published yesterday, Roy Choi says he “can’t find the meaning anymore,” and announces that he has stopped eating meat for ethical reasons. The result might just be Choi’s departure from the food world altogether—or at the very least stepping away from the restaurant arena. There are no big changes in the works as of now, and Choi says he’ll continue to cook with meat “as that is my profession.” But the Kogi founder expresses the desire to change his overall life path, even calling out to British celebrity chef and nutrition booster Jamie Oliver to join forces. (Read Choi’s entire post here.)

Sure, this is all a little odd, and we hate to think of a Los Angeles restaurant scene where Roy Choi isn’t shoving some eggy mix of pork belly and kimchi into our faces. But this also feels like the first crest of an inevitable crashing wave. At a time when the foodie frenzy has reached its intolerable peak, when every weekend a different restaurant is advertising a whole-hog cookout, and when the debate over the ethical nature of foie gras manifests itself as a series of $200, six-course duck liver smörgåsbords—is it any wonder that one of industry’s pioneers is burnt out? “Over the top” has been Choi’s M.O. from the beginning and we’ve gladly devoured every flavor-packed morsel along the way, but it seems that Choi might be feeling—and publicly addressing—what a lot of us have been feeling for a while now: the desire to step back, take a breath, and remember what this whole eating thing is (or should be) all about. If there’s anyone who we trust to do it, it’s Choi.