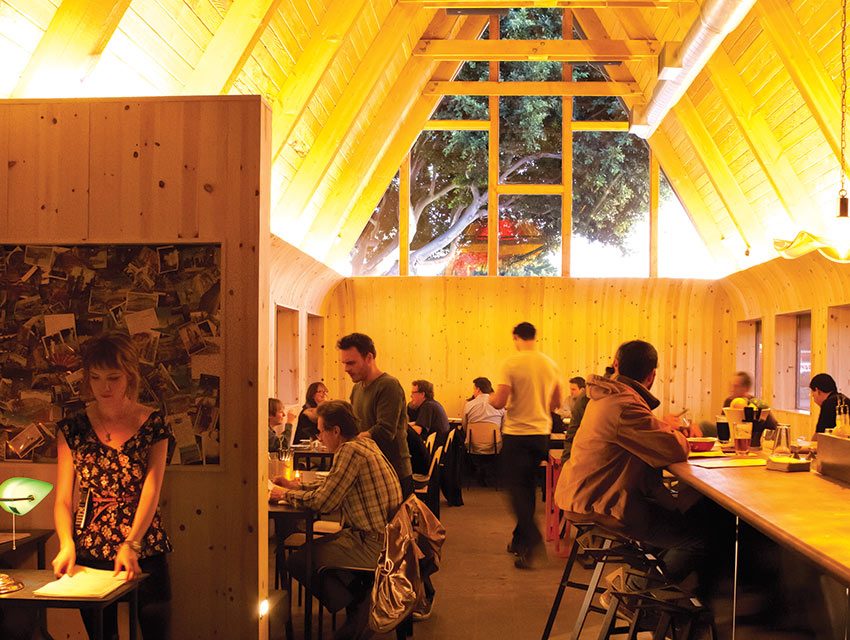 “A-Frame has always been Hawaiian,” says Choi. “Look at our popcorn, our ribs, our salad with Maui onions—but it was more of an impression than a direct interpretation.” Now, he says, they’re going all the way, thanks to A-Frame’s new chef, Johnny Yoo, who spent years working in food service on Oahu and a few months convincing Choi and owner David Reiss to rethink the restaurant as a whole.

The move won’t come as much of a surprise to those who follow Choi on social media; vague references to “Aloha” have graced the @Ridingshotgunla Twitter feed for the past couple of weeks. The new A-Frame will feature tropical décor including loosely Trader Vic’s-inspired murals by L.A. artist Eric Junker, Hawaiian music, new staff uniforms, and a revamped cocktail program. (*Fun fact: Choi was the executive chef of Trader Vic’s at the Beverly Hilton during his years at the hotel.)

But please, don’t call it tiki. “We’re stripping tiki of its kitsch,” says Junker, “and trying to remove all the cheekiness and condescension from the genre.”

Don’t expect crab Rangoon or mango salsa, either. “This is true Ono grindz,” says Choi, who is modeling the restaurant’s cuisine and vibe after island hangs like Honolulu’s Side Street Inn and the Hawaiian chain Zippy’s (“It’s like if you mixed an IHOP, an In-N-Out, a Costco hot dog stand, and a local spaghetti joint,” he says.) The chef has been visiting Hawaii regularly since he was 16 and went back recently for another dose of inspiration. “I never try to do something unless I understand a culture and feel we can represent it and respect it,” he says. “Back when I was a hotel chef I used to go almost every year, and at night I’d hang out with the locals at these restaurants where the wall between diner and worker is really broken down—everyone is like family.”

Choi hopes to translate Hawaii’s particular brand of blue collar cuisine for the mainstream diner “without sacrificing its soul,” he says. Hawaiian food features a mix of influences including Japanese, Polynesian, Filipino, and the American post-war diet of the 1950s, and staple dishes range from mayonnaise-drenched macaroni salad to spam and vegetable topped sushi, or musubi, to saimin, a pan-Asian spin on ramen.

All of this will find its way onto A-Frame’s new menu, which is still being finalized (see early renditions of a few dishes in the slideshow below), as is the decor (which may or may not include a wooden outrigger hung from the ceiling), and the cocktail program (here you can expect some tiki riffs).

The restaurant will remain open throughout the transition with the exception of a short closure just prior to the new concept’s debut. Choi and Reiss insist that the switcheroo has nothing to do with the success of A-Frame in its current form.  “It’s like retiring after a championship,” says Choi. “A-Frame still has the most regulars of any of my restaurants. It was just time for a change.”

Be ready for it sometime in February. Aloha.