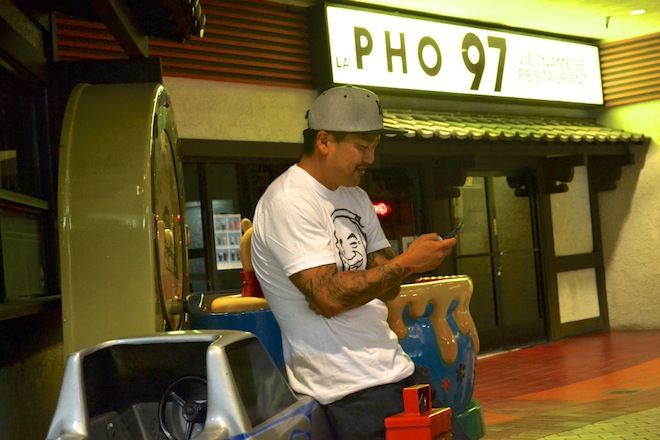 “This was a bustling plaza back in the ’80s,” says Natasha Phan, Director of Business Development and Marketing for Chego!, which has just opened its new location inside said plaza, the Far East Plaza in Chinatown. We’re in a crowd full of Chego-lovers, chatting over compostable paper bowls full of kimchi and spicy pork laden rice while a DJ spins into an otherwise empty plaza courtyard. Chego! (which, in Korean, is an exclaimation that means something like ‘this tastes so amazing that I have no words for it’) first opened in Palms in 2010. That location closed late last year after the landlord refused to make necessary structural repairs. “This is Chego! 2.0,” announces chef and owner Roy Choi, who, on opening night, was found humbly handing menus out by the storefront’s door.

My knowledge of Chinatown is limited—until recently, I naïvely thought it was just a tourist trap—so Phan and Choi fill me in. It’s a family-friendly place, as it always has been, since their youth, and little has changed in the last 20 years. While tourists flock to the shops and Peking duck stops during the day, Chinatown turns into a ghost town after 5 p.m. “Even on Chinese New Year, when the streets are packed with people, everything closes after 5. Compared to the San Gabriel Valley, which is full of life at night, Chinatown is dead. Everyone goes home to cook and eat with their family,” says Choi. It’s a respectable life and way of business, but it isn’t doing much to help the neighborhood grow or attract new residents.

George Yu is the Executive Director of the Chinatown Business District and has been prodding Phan and Choi to open something in Chinatown for years. “George used to see me and say, ‘hey, when are you guys coming to Chinatown?’ and I wasn’t even sure if he was serious for a long time,” says Phan, smiling. She goes on, “Then, we started having issues on Overland and we started sort of looking around. George took us into the (Far East) Plaza and we walked by this empty corner store front and Roy just said, ‘This is it.’”

“We don’t want to take anything away from Chinatown,” says Choi, “I have so much respect for this place, I grew up in this place.” He’s introduced himself and his staff to the neighbors, who seem welcoming, if humble. “We’re having menus printed in Chinese, Vietnamese, and Spanish, and I’m going to paste them to the windows, like this [he points at a nearby restaurant’s menu display]… I want everyone to feel welcome. This is for them.”

When asked if they would return to the Westside, Phan is firm, “The Westside is our home, you know? It always will be. But right now we have to focus on one restaurant at a time. We have to give this our all right now. We want it to fit in and bring new life to the area, but also to serve the area with something new, and something open late.”