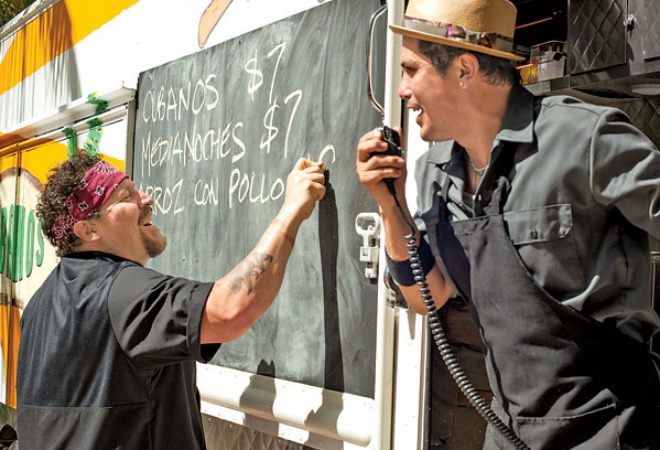 Roy Choi and Jon Favreau have been causing quite the stir with their series of “El Jefe” pop-ups, which celebrate the fictional food truck at the center of the recent film Chef, which Favreau wrote and directed and on which Choi served as a culinary advisor and co-producer.

They’ve sold Cubanos at POT, Choi’s Koreatown restaurant, and at The Grove, but it seems that they’ve saved their biggest event until now: El Jefe at Animal, teaming up with acclaimed chefs Jon Shook and Vinny Dotolo for a Cuban-inspired multi-course family style dinner ($75 per person) at their Fairfax restauant on July 21.

Here’s the menu so far:

Remeber that the duo behind Animal and Son of a Gun got their start cooking in South Florida, so expect Jon and Vinny to do pull off some exciting dishes when cooking alongside Roy Choi.

If the full dinner is a bit out of your price range, you can also order those now-famous Cubano sandwiches to-go ($9) on the patio outside Animal (diners will also be able to order them to take-away).

Reservations can be made from 6 p.m. to midnight on July 21 (call after 2 p.m. to book) and the seven-seat bar will be available for walk-in guests.

8 Iconic L.A. Dishes That Have Stood the Test of Time