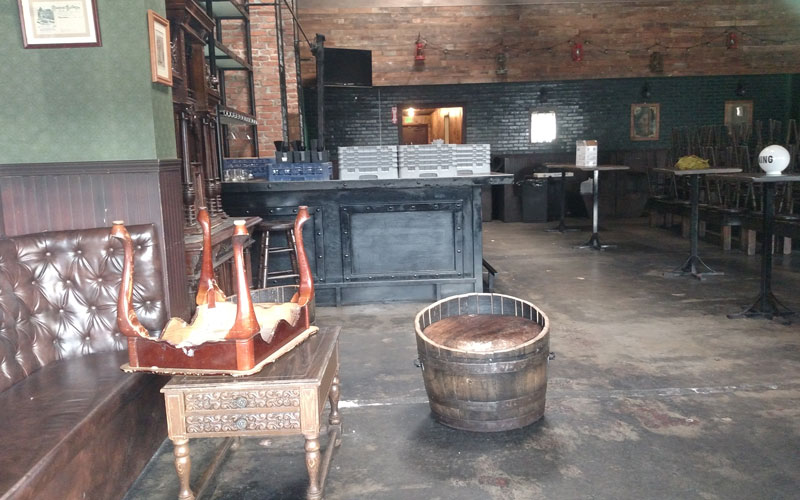 It looked like a bar should look. Dark wood. Bricks. Leathery. Lived in. It felt like your favorite pair of jeans. This was its charm – not that it stood out, but that it was familiar. Rosewood Tavern (448 N. Fairfax) closed over the weekend, which is a damn shame, because it was something Los Angeles so often lacks – a walkable neighborhood bar.

For those of us who call Fairfax Village home, Rosewood was our watering hole. It’s where we did happy hour. Celebrated birthdays. Held meetings. Took dates. Or just went to read. (There was a sunny spot in the front.) It served food (the burger and sliders were good), and it offered good whiskey and good beer. It was big enough to offer privacy when it was empty. When it was full, it felt like a place to be.

Like everyone in our neighborhood, we could just go without planning. On a whim. No driving. No Lyft. We could open our front door, walk five minutes and be somewhere–as if we lived on the East Coast or something. L.A. bars and restaurants offer some of the world’s best food, drinks, and interior design, but the ultimate luxury for so many of us is time, and there are a lot of us willing to trade Sancerre and $13 grilled cheese sandwiches for a beer and a burger five minutes from where we live. (Do you hear me, people who open bars? I want to give you my money. TAKE MY MONEY.)

My wife and I did happy hours there when we were both freelance writers working from home. (The pay wasn’t great, but the freedom to call it quits at 5 on a Friday and grab apps and drinks was, well, one of the reasons you’re a freelance writer, really.) It’s where we plotted and schemed for the future—for our careers and the family we wanted to start. When friends came in from out of town, Rosewood is where we took them for casual drinks. When our twins were born, it was the first place the four of us went (for an early dinner) that was not the pediatrician’s office. It sounds funny to say this now, because the kids are a year older and have been everywhere, but the simple act of taking the babies somewhere and bringing them home gave us a feeling of, “We can do this again. We can actually leave the house.” Rosewood was where we took baby steps as parents.

Sweet Chick, which is a Brooklyn-based chicken-and-waffles restaurant, will be moving in. This is unfortunate for those of us who never chose to live in hipster Brooklyn, because now apparently Brooklyn is coming to live with all of us. (The exporting of Brooklyn is ironic, given the Brooklynite loathing of anything not local or original, but that’s another article.) Sweet Chick,  in partnership with the rapper Nas, is branching out all over the country, and L.A. is next. I wish it well. I’m sure we’ll eat there – no reasonable person hates chicken and waffles–but it won’t fill the hole left in the neighborhood. It wasn’t the best. It wasn’t the worst. But Rosewood was ours–a real neighborhood bar–and we’ll miss it.

Joe Donatelli is Senior Writer at Los Angeles magazine. You can follow him on Twitter @joedonatelli and Facebook. He wrote:The Moment You Realize Your Soul Belongs to Los Angeles.