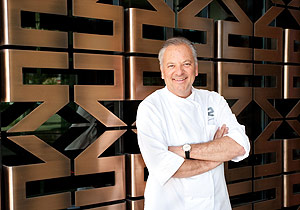 Mid-city folk rejoice! As announced yesterday, Rivera chef John Sedlar will be taking over the space vacated by Neal Fraser’s Grace when it moves from Beverly Boulevard to downtown L.A. next month. Today, we learn more about Sedlar’s upcoming small-plates operation, R26.

According to the official release, the culinary focus will be on 26 different nations or regions in Central America, South America, Mexico, the Hispanic Caribbean, and parts of Spain. And it wouldn’t be a John Sedlar restaurant without cocktails. Expect an adventurous program led by Rivera’s acclaimed Julian Cox and Kristina Howald. Design comes courtesy of architect Osvaldo Maiozzi and designer Eddie Sotto.

More details to come. Right now, the projected opening date is “Fall, 2010,” which gives us just enough time to get our fill of Rick Bayless’s Red O, opening next week (reservation line open today). Hooray for the Latin invasion!