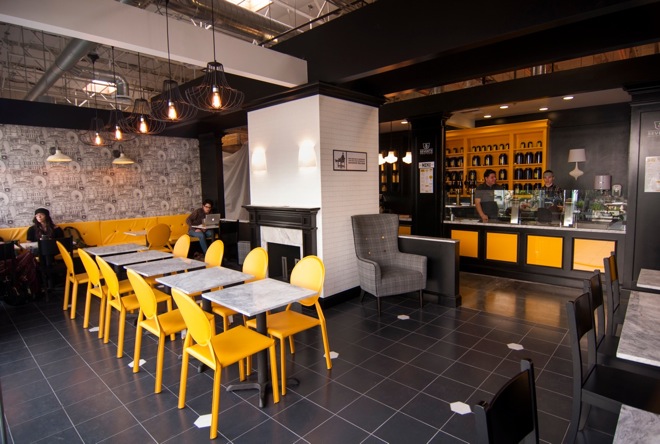 If taking a trek down to Orange County any time soon, might I recommend a stop in Costa Mesa? Just a few turns off the Harbor Blvd. off-ramp on the 405, you’ll stumble upon the OC Mart Mix, an unlikely gourmet mecca that’s continuing to get more and more food cred with its solid line-up of vendors, and it’s got no signs of slowing down either.

What originally drew me to the OC Mart Mix—an open food court of sorts tucked within the larger expanse of the South Coast Plaza (an otherwise not-particularly-noteworthy collection the usual chain megastores)—was a visit to the celebrated Portola Coffee Lab, and its even more geeked-out offshoot, Theorem.

One step up to the bar at Portola Coffee Lab, and its immediately evident that you’re in for an experience. A veritable selection of coffee brewing equipment that looks like it’s straight out of a sci-fi movie is being put to work by baristas in lab coats, crafting stellar drinks from beans roasted in-house by the man behind the madness, chemistry major Jeff Duggan. And rest assured: this is no gimmick. Jeff is dead serious about his coffee, but now he’s begun obsessing on a new project. Tea.

Jeff and his business partner/wife Christa have recently opened Seventh Tea Bar, directly adjacent to their wildly successful Portola Coffee Lab. “After water, tea’s the most consumed beverage on the planet,” explained Jeff. “But it’s all too often misunderstood and underappreciated in the States. There’s no real tea culture here.” One look at the menu, and it’s clear that Christa and Jeff are setting out to change that.

Perusing the 30+ varieties of single-origin unblended teas, folks (like myself) who haven’t gotten schooled on tea have finally found their classroom. Robust black teas, special greens, delicate whites, and a few herbal preparations round out the selection, each with their own careful preparation. The Duggans and their crew brew each leaf countless times—adjusting any and all of nine variables including water temperature, steep time, and pressure—until the perfect combination is found. Only then does it make it onto the menu. “When we find the method that gives the best natural expression of the tea, we digitally program it into our brewing equipment so that we can replicate that perfect cup every time,” Jeff says. On my first trek to Seventh Tea Bar, I met with Jeff, and as I stared at almost overwhelming selection, he recommended trying the Gongfu service, a do-it-yourself sort of experience that takes you through multiple steepings and tastings of the same tea. He pointed me toward a smoky tea—a vintage 1995 Dayeh Broadleaf Pu-Erh—as if he somehow knew my affinity for peaty Islay Scotch. (And who knew tea could have vintages?!)

The Gongfu tray came out, including a gooseneck pot filled with hot water, a small ceramic cup filled with tea leaves and a specially fitted lid used for straining, another cup to drink out of, and a little dumping reservoir. Jeff instructs me to give the leaves a quick first rinse, pouring hot water over them for only about 15 seconds to take any rough edges off the tea. Some folks dump this rinse, others drink it, and others skip it altogether, instead opting to just steep the leaves for two to three minutes, like a normal cup. I couldn’t in my right mind pour anything out, so I gave it a sip. It was intriguingly smoky, but not at all in an overpowering way. The next steeping—around three minutes—brought out that smoke again, this time mixed with lots of notes of straw and hay… barnyard-y in an awesome way.

Sitting with Jeff, I got about six steeps out of the same leaves, each one slightly different from the one prior, not only because the potency of the leaves was going down as the flavors were extracted but also since the water temperature was decreasing over time. In talking with him and looking around the little beverage empire he’s brewing, I really appreciated his efforts toward control, consistency, and perfection, which is why I found it particularly odd that he’d offer something like the Gongfu tea service, which leaves so much up to chance in the customer’s hands rather than those of his knowledgeable baristas with their precisely calibrated machines. “Gongfu is an experience,” he waxed. “It’s hands-on, and it connects you with your drink. You get to enjoy it as it evolves over each cup. We’ve been chatting for 30 minutes and you’re still drinking the same order of tea. You want to take time to savor it, and that’s why I like recommending it.”

On the food side, chef Katherine Louis has created a thoughtful menu that honors teatime traditions from other parts of the globe. Tea sandwiches—like the “Salty Sweet” made with fresh ricotta, apricot jam, pistachio pesto, wildflower honey, and cracked black pepper, or the “Citrus-Cured Salmon Roll” made with house-cured wild salmon, dill cream cheese, shallot-caper relish, shaved cucumber, arugula, and heirloom tomatoes—are available as are simple but delicious bread assortments with spreads such as za’atar spiced goat cheese, strawberry-black pepper jam, or garlic-curry compound butter. And if you’re in the mood for something sweet, a variety of croissants, tarts, macarons, truffles, and scones will taunt you from the display case until you finally give in.