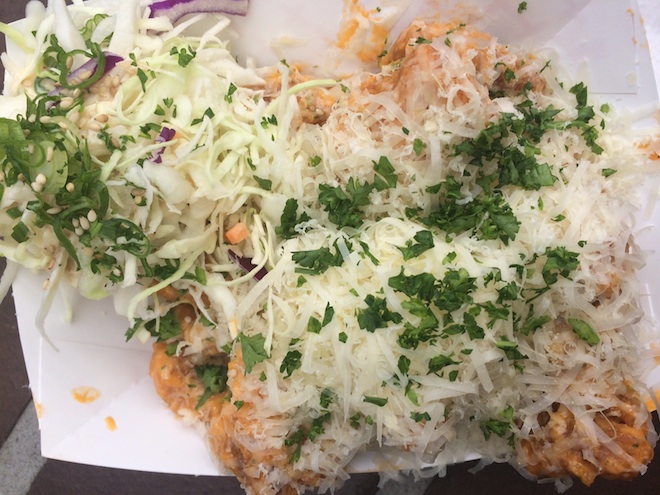 At LAmag we are lucky enough to have a fleet of food trucks waiting to feed us just outside our Miracle Mile offices. Here we highlight the city’s grub on wheels.

The Truck: Belly Bombz. Look for a jet-black truck with an angry cartoon bomb that serves as the “o” in Bombz.

The Lowdown: The truck offers aggressive finger foods with a few hints of Korean influence. It’s not exactly fast food (wings are fried to order) but it’s got all the guilty goodness of your favorite K-town cafes.

The Peeps: Albert Shim, the owner and chef behind the bombz, used inspiration from his Korean roots and classic French training to create the menu.

The Loot: Cash and cards accepted.

The Goods: There’s a stiff competition between the Sriracha lime wings ($8) and the crispy pork belly sliders ($8). The birds are fried and coated with a spicy sauce made from Sriracha (duh) and fresh lime-juice. The mini burgers are made with five hour-braised pork belly that’s crisped on the grill and mounded with a scallion slaw and a smear of their secret “Mom’s recipe” sauce. For $2 extra you can get a combo of both. We were looking for something hot, cheesy, garlicky, and meaty when the spicy garlic Parmesan wings ($8) caught our eye. Heavily glossed in a spicy red garlic sauce and snowed in by heaps of salty Parm, the wings were accompanied by a tangy citrus slaw, which tried its best to cut the fat.

The Verdict: These are definitely worth eating again, but maybe on the weekend when we have the option to slip into a food coma right after.