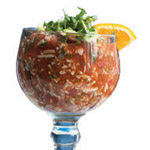 Peruvian chef Ricardo Zarate hopes to debut his third restaurant this month, in Marina del Rey. Named Paiche (pronounced PIE-chay), after the giant Amazonian river fish, the operation is being described as a cevicheria, but Zarate says don’t be fooled. “People hear ‘cevicheria’ and they think it’s only raw fish. In Peru a cevicheria is just a seafood restaurant. There are hot dishes, even meat.” Expect plates large enough to share and, of course, plenty of pisco.