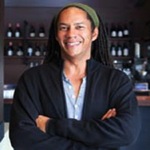 Restaurateur Brad Johnson and chef Govind Armstrong have announced plans to open a new restaurant called “Willie Jane” on Abbot Kinney this month. This will be a quick turnaround, since it’s moving into the old Wolf in Sheep’s Clothing space, which closed on Saturday after being in business for less than six months.

Armstrong—who we named as one of our Chefs of the Year in 2012—and Johnson bring with them the formidable reputation they’ve amassed from Post & Beam in Baldwin Hills.

“The restaurant is named for Johnson’s 100 year-old Georgia-born aunt, and will offer Chef Armstrong’s take on Southern American cuisine with an emphasis on low country coastal dishes and a selection of large format plates to be enjoyed family-style.

Bar Manager Phuong Tran is creating a beverage program that will focus on a specialty collection of bourbon and a cocktail menu that includes seasonal libations and Southern classics.”

We’re excited, but let’s just hope they don’t fall victim to the same astronomical rent gouging from Abbot Kinney landlords that recently forced our beloved Jin Patisserie to shut its doors. Look for Wilie Jane as early as mid-March.