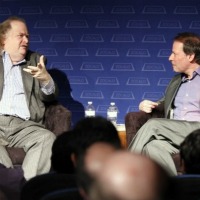 Last night’s Zocalo Public Square event at the Downtown Independent Theatre featured soon-to-be-former LA Weekly critic Jonathan Gold (he’ll be working for the Los Angeles Times come next month) discussing the benefits and pitfalls of “foodie” culture with New Yorker staff writer Adam Gopnik. Lasting just under an hour, the discussion was a bit like watching a culinary-centric episode of Seinfeld. It may have not really been about anything, but damn if it wasn’t entertaining.

After Gold’s brief introduction of Gopnik, read from a crumpled cue card pulled from Gold’s pocket, the talk began with a bit of wine (as most great discussions do). Gopnik revealed that the history of French wine culture, which is fraught with unspoken mores, is largely sardonic in nature and, for all it’s supposed seriousness, is essentially taken with a grain of salt by the French. According to him, this point seems to be lost on many wine-loving Americans who insist on ranking wines to objective levels.

The talk then shifted to Ferran Adrìa’s acclaimed (and now closed) restaurant El Bulli, which perfected molecular gastronomy during its reign as the world’s best restaurant. The main subject was a beach ball-shaped sphere of bleu cheese that was included on one of Adrian’s sprawling tasting menus. Gopnik pointed to the dish as an example of cuisine as spectacle, the idea of cooking as magic and the chef as magician. Gold lamented he would rather have enjoyed a simple square of cheese.

The anecdote of the night went to the multifaceted and lively Gopnik, who referred to a remark made by his eight-year-old daughter after a magnificent meal in Paris: “And tomorrow we’ll all be hungry again.”