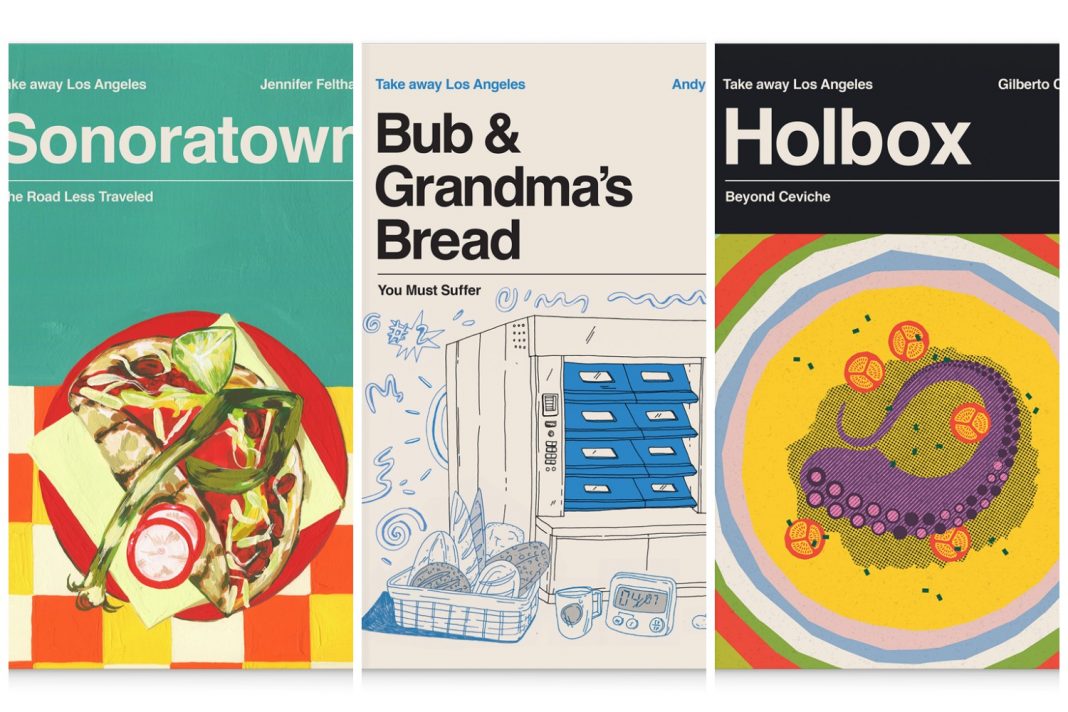 Ever wanted to know the stories behind Los Angeles restaurants like Sonoratown, Kato, or Hop Woo? A new series of books, Take Away Los Angeles, tells those stories while helping local restaurants get through the pandemic.

The series, published by Australian imprint Somekind Press and curated by Chinatown cookbook shop Now Serving, is fueled by crowdfunding and printed on demand. The individual establishments tapped to be a part of the series had a crowdfunding period of ten business days, during which they needed to meet a threshold of 100 book preorders for the project to go forward. From there, it takes about 12 weeks for the book to be released. It’s a much shorter timeframe than traditional publishing—and it comes with an economic benefit for the restaurants. The author/venue take from the presales is 40 percent and that goes up to 50 percent for subsequent printings. Somekind’s original series, focusing on food and beverage businesses in Australia, has already resulted in over 20 books, and generated about $300,000 (AUD) for the establishments.

All of the L.A.-centric books offered so far met their preorder goals and will move forward.

“We were blown away by the success of them,” says Simon Davis, publishing director of Somekind Press, on a recent video call from Sydney. Davis, who has over a decade experience in the food-centric publishing world, and Vaughan Mossop founded Somekind at the dawn of the pandemic to help Australia’s restaurants. As pandemic conditions there began to improve, the publisher considered repeating the project for Los Angeles’ restaurant industry. “A lot of the Sydney food community here very much looks over to L.A. and what’s going on in L.A.,” says Davis. That’s where Now Serving comes into the picture.

Ken Concepcion, who co-owns Now Serving with his wife Michelle Mungcal, says that they were “pleasantly surprised and honored” to take on the commissioning editor role for Take Away L.A. “With my background in restaurants—and Michelle worked in restaurants too—we think of ourselves more as a part of hospitality and the restaurant community, who also sells books and culinary tools and all that stuff,” Concepcion says by phone.

Concepcion and Mungcal looked at which restaurants they should approach to be a part of the series. “We basically came up with a list of places that we thought were important to the L.A. food and hospitality community, and had their own micro-communities and regulars,” says Concepcion.

They also wanted to focus on restaurants that had been around for at least a few years. “Before COVID, there were so many restaurants opening in L.A. that you could easily be swayed by recency bias,” says Concepcion. “We wanted to see the scene with a little bit more clarity and look at places that might not necessarily have the time or the resources—they don’t have a PR department or an infrastructure—where they would be able to pursue a book deal or have time to do that.”

Each of the books is author-led, so they can vary from narrative-driven to recipe-driven books. They are, essentially, messages from the restaurants to the communities that have supported them. “The point of these books are very much community-focused. They’re about being able to talk to their communities and being able to tell their stories in ways that they’ve not been able to do otherwise,” says Davis.

Initially, the plan was to stagger the preorder periods, but that shifted after Los Angeles restaurants were forced to stop in-person dining again. “We were really concerned that some of these places would be struggling to the point where they wouldn’t be able to stay open or stick around,” says Concepcion. The goal then became to get the campaigns going so money could be raised as quickly as possible.

So far, it’s looking like Somekind Press’ Take Away series will be a success in Los Angeles, and prospective supporters can still order copies of books that have been announced online. Plus, there are more to be announced in the new year.

RELATED: An Ever-Growing List of L.A. Restaurants That Have Closed Amid the Pandemic