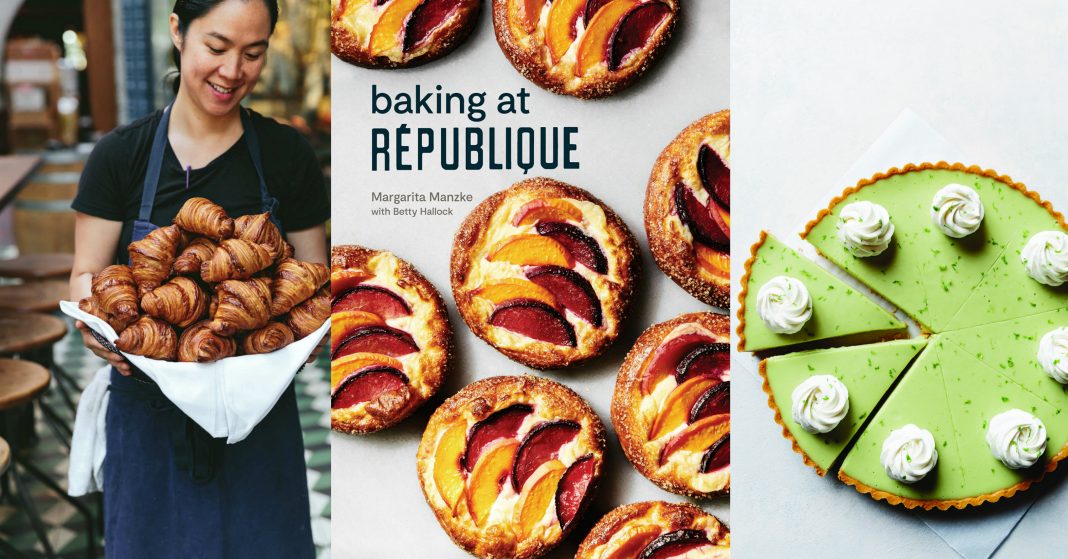 Margarita Manzke has been making L.A. sweeter since opening République with her husband Walter in 2013. Though she has little in the way of formal education as a pastry chef, she’s become one of the top bakers around. Her program of desserts and daytime pastries has earned her a 2019 James Beard Award nomination for Outstanding Pastry Chef–not to mention the line of diners queuing up outside the restaurant on any given morning, hoping to grab one of her signature croissants or tarts while they last. 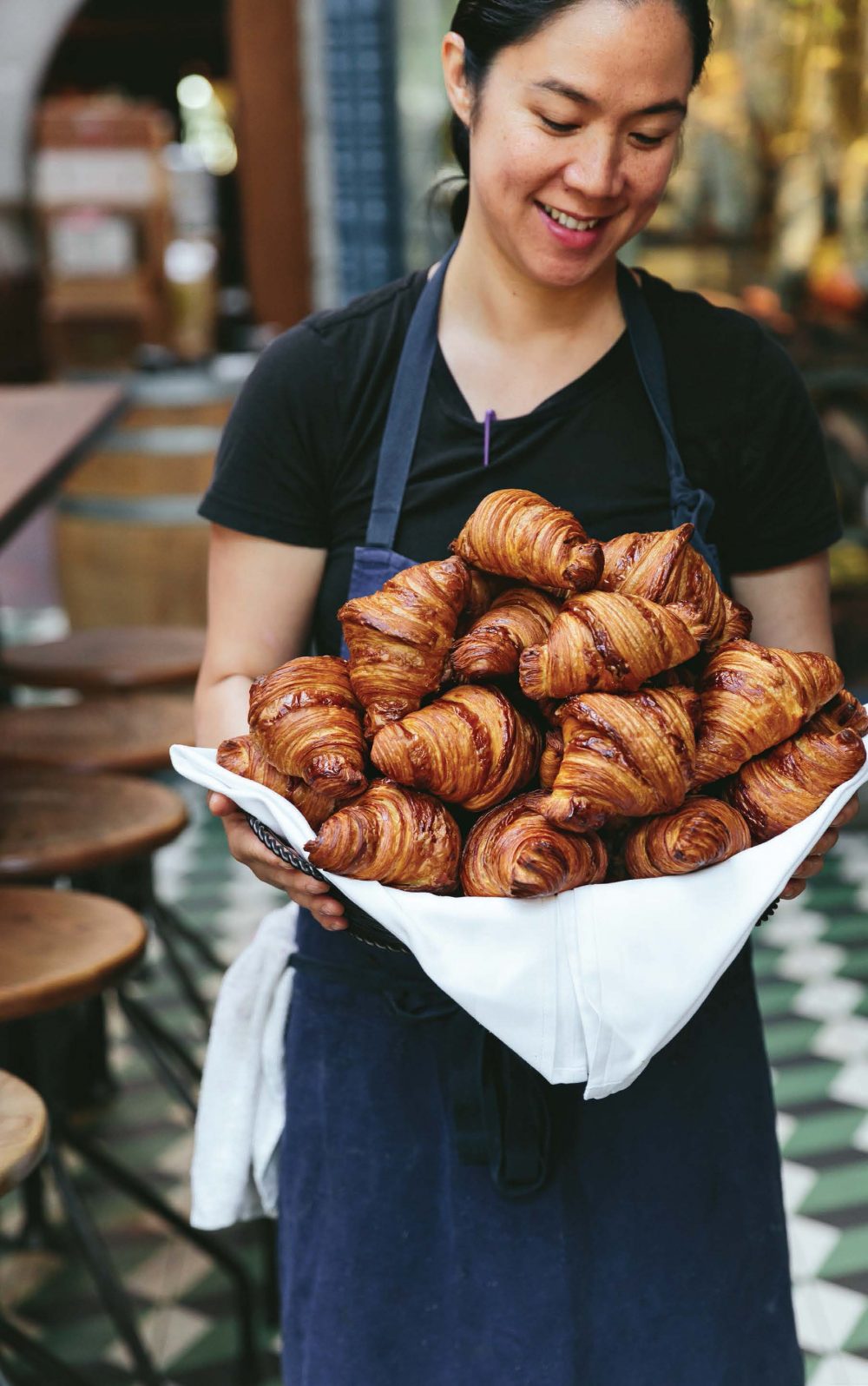 Now Manzke is sharing what she’s learned in her first book, Baking at République: Masterful Techniques and Recipes. Along with her co-writer Betty Hallock, Manzke shares dozens of the recipes that she and her pastry team show up at 3:30 each morning to prepare.

Manzke grew up around her parents’ restaurant and hotel outside of Manila, and determined early on that she wanted to follow in their footsteps by cooking professionally, but it wasn’t until she was studying at at Le Cordon Bleu in London that she caught the pastry bug.

“When I was in school in London, I had a truly great pastry instructor,” Manzke recalls. “She did everything to perfectly, and I was totally in awe from the start.”

From there, she went to study at the Culinary Institute in New York, and then work in Los Angeles kitchens including Spago, Patina, and Mélisse. In 2007, she stepped into the role of pastry chef at Bastide Restaurant, working alongside Walter. While there, the seeds of what would become République began to grow.

One of Manzke’s strengths in developing recipes, including several that appear in the cookbook, is her ability to creatively reinterpret flavors and notes from the cuisine of the Philippines into her French-leaning pastry creations.

“There’s a recipe in the book for bibingka, which is one of my favorite things to eat when I’m back in the Philippines. I also included a recipe for halo halo, which, to me, is the quintessential Filipino dessert,” she says. “When there’s an opportunity, I like to draw on Filipino flavors–but only if it makes sense for the dish. I try not to force it.” 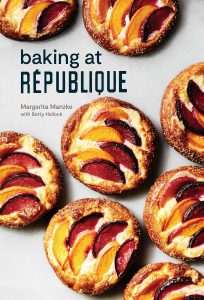 An example of a case where it make perfect, delicious sense is her avocado-calamansi tart. Calamansi, a small, tart citrus fruit which grows in the Philippines, provide the basis of a curd that accompanies a silky and sweet avocado filling. Crafting the tart isn’t the simplest thing in the world, but her recipe breaks it down in a way that anybody who’s binged a season of Great British Baking Show should be able to master.

And while she packs the pages with carefully tested recipes (and stunning photos by Kristin Teig), Manzke ultimately wants readers to consider the book more of a jumping-off point than a rule book.

“A recipe is a guide,” she says. “Don’t be afraid to improvise.”

“I used to make an avocado panna cotta, topped with yuzu grantié. The combination of avocado and citrus is kind of weird to me. I know it’s popular in salads, but in the Philippines, you eat avocado sweet, as a dessert, with condensed milk, sugar, and ice. It’s so good. That’s how I came up with the icy yuzu granité and avocado. And it stuck in my head. Here the combination is a creamy, sweet avocado filling with calamansi curd, which is tart like lemon curd.” — Margarita Manzke

Unwrap the dough and place it on the work surface. Pound the disk with a rolling pin to flatten it a little. Place the dough between two large sheets of parchment paper. Roll out the dough to 1/8-inch thick. Remove the top piece of parchment from the dough. [Find Margarita Manzke’s recipe for Pâte Sucrée on page 98 of the book.]

Invert the dough over a 9-inch tart pan and remove the second piece of parchment. Gently fit the dough into the pan, turning the pan as you work, to fit the dough snugly inside with minimal overlap. Make sure the dough is pressed all the way down into the bottom corners. Trim away excess around the rim.

Prick the tart dough all over the bottom and sides with a fork. Put the pan in the freezer to chill for at least 30 minutes (or up to two weeks, covered completely with plastic wrap).

Remove the tart dough from the freezer and bake until golden brown, 20 to 25 minutes. Remove from the oven and set aside to cool.

To make the calamansi curd: Submerge the gelatin in a bowl of ice water. As soon as it softens, squeeze as much water out of it as possible. Set aside.

Combine the juice, granulated sugar, and eggs in a plastic pitcher. Mix with an immersion blender or use a blender to mix.

Fill a saucepan with about one inch of water and bring to a simmer over medium heat. Pour the mixture into the top of a double boiler or into a stainless-steel bowl that fits over the saucepan without touching the water. Cook, whisking continuously, until thickened.

Add the softened gelatin and continue to whisk until it dissolves then transfer to the bowl of a stand mixer fitted with the whisk attachment. On low speed, mix until the mixture cools to 130 F on an instant-read thermometer. Add the butter gradually until all is incorporated.

Cover with plastic wrap, laying it directly on the surface to prevent a skin from forming. Place in the refrigerator overnight to completely set.

To make avocado filling: Submerge gelatin sheets in a bowl of ice water. As soon as they soften, squeeze as much water out of them as possible. Set aside.

In a saucepan over medium-high heat, combine the cream and granulated sugar and bring to a boil. As soon as the mixture boils, remove from the heat. Add the gelatin sheets to the hot mixture. Stir to dissolve the gelatin.

While still hot, add the avocado and use an immersion blender, or transfer to a blender, to puree. Strain the mixture through a fine sieve into a container. Cover with plastic wrap, laying it directly on the surface to prevent a sin from forming. Set aside.
Spread a layer of the curd on the bottom of the tart shell, covering the whole surface, so that it is about 1/3-inch thick.

Pour the warm avocado filling on top of the curd, filling the tart shell to the rim. Transfer the tart to the refrigerator to set completely, about two hours.

To make the vanilla whipped cream: In a clean mixer bowl, using the whisk attachment, whip the cream, vanilla seeds, and confectioners’ sugar to medium peaks. (Keep the vanilla pod to flavor granulated sugar or vanilla extract.) Transfer the whipped cream to a pastry bag fitted with a star tip and place in the refrigerator until ready to use.