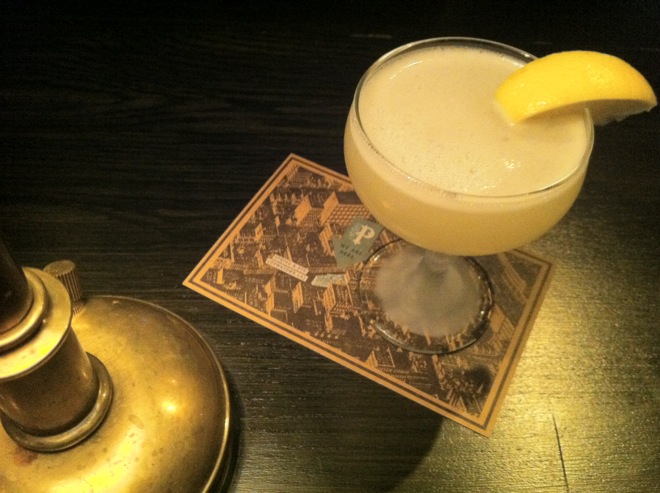 The Bee's Knees cocktail at The Parish

On December 5, party like it’s 1933! Wednesday marks the 79th anniversary of Repeal Day, when Prohibition ended and Americans could finally fall gloriously off the government-funded wagon again after 13 long, dry years. To commemorate your right to drink, celebrate with any or all of these drink specials and events around town.

Bar 1886 in Pasadena will be serving up a special Repeal Day cocktail all evening called “Satan’s Whiskers.” The recipe—which originated at the Embassy Club in Hollywood in 1930—is made with gin, dry vermouth, orange juice, and curaçao, and it’s become an industry classic. Should you feel like continuing the celebration, the adjacent Raymond restaurant will host a six-course High West Distillery dinner with master distiller and blender David Perkins on Thursday the 6th for $75 a person. (Dinner reservations: (626) 441-3136)

Los Feliz’s Big Bar is screening the Kevin Costner classic The Untouchables on its south patio. Toast to the rise and fall of mob boss Al Capone with gangster-style drinks like the “St. Valentine’s Day” with Templeton Rye, Aquavit, lemon, and grenadine and the “Chicago Way” with Zaya rum, aged cachaça, lime, and Fernet Branca. (Make sure to indulge in the Templeton Rye peanut caramel corn, too!)

All three Chaya restaurants (Downtown, Beverly Hills, and Venice) are toasting the occasion with $12 pre-Prohibition cocktails, available from December 3 to 9. Chaya Venice is keeping things OG with the Cooperstown cocktail made with Old Tom gin, vermouth, and mint, which dates back to 1917’s Ideal Bartender book. The Beverly Hills Chaya Brasserie and Downtown Chaya locations will do up their own spin on the classics.

In West Hollywood, Comme Ça is celebrating by offering classic rye and gin based cocktails like Sazerac, Manhattan, Ward Eight, Aviation, Gin Rickey, and Negroni for $5 all night long.

Also in WeHo, The Hudson is featuring drink specials on a couple of whiskey-based cocktails from its fall menu for the holiday as “Whiskey is the spirit that was moving illegally most during prohibition and celebrated upon its lifting,” said owner Brett Cranston. The “One Way Out” cocktail with Bulleit Rye, Carpano Antica, Grand Marnier, and rhubarb bitters is $8, while the Hudson Old Fashioned with Elijah Craig 12 year, Angostura bitters and sugar is $7. (Both cocktails are normally $11.)

The Famous in Glendale will be doling out 25-cent shots of Evan Williams bourbon and $5 Brown Derby (bourbon, grapefruit and honey) cocktails. Don your best speakeasy garb for this themed party.

Also in Glendale, Neat Bar will be throwing a Christmas tree trimming party where everyone wins. You get a free drink (dealer’s choice) for every ornament you bring in and bar owner Aidan Demarest doesn’t have to stress out about decorating his place. Demarest says that the only limit to how many free drinks you get is at the bartender’s discretion. “We’ll stop serving you when you start getting stupid.” Hey, the 99-cent store sells ornaments, right?

At The Parish in downtown, head bartender John Coltharp will serve the Bee’s Knees (gin, lemon, honey) for $8. A classic from the days of bathtub gin, honey was used instead of sugar to cover up the taste of the homebrewed spirit.

Leave it to a bar group named after the year Prohibition ended to know just how to celebrate the auspicious anniversary. All six of the 1933 Group’s L.A. bars—Bigfoot Lodge, Bigfoot West, La Cuevita, Oldfield’s Liquor Room, Sassafras Saloon, and Thirsty Crow—will feature a special Repeal Day cocktail for just four bits, or 50 cents to you kids.

For those who just can’t wait until Wednesday, The Varnish and Cole’s Red Car Bar are hosting the 4th Annual Jimmy Barela Bartending Competition starting at 6 p.m on Tuesday, December 4, which we’re officially naming Repeal Day’s Eve. Guests are encouraged to dress in 1930s attire. Drink specials include a $5 Templeton Rye punch and a Fernet toast at midnight, along with a Fernet ice luge.