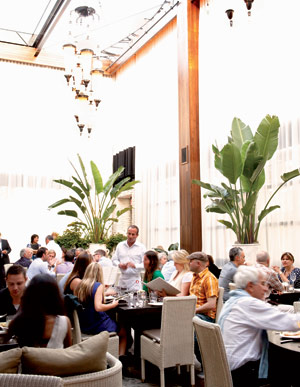 “I’m cute and I’m hungry,” the woman pulling on the brass door handle of Red O was saying to a friend. The place was locked, and greeting arrivals five minutes after opening time was a taped-up sign that read Please slide résumé under door. Not that the width of her hand-hammered bracelets or the height of her heels suggested she was here in search of employment. Only after a tall, clipboard-wielding man emerged to verify that she and everyone else out front had a reservation were they allowed to move along to the hostess desk inside.

Red O, the new high-ticket Mexican restaurant on Melrose, is the kind of slightly overheated venue that routinely pops up in L.A. You’ve experienced it before—the unavailable tables, the press of people by the entrance, the bloggers snapping pictures of the food. When the satellite of Katsuya opened in Brentwood, the Westside descended as if it had gone too long without prime toro. When Craft opened in Century City, the dining room was aglow with the shaved heads of talent agents who’d scurried in to sample Tom Colicchio’s rustic fare. As soon as Thomas Keller’s Bouchon debuted in Beverly Hills last winter, it was packed with a crowd wearing enough Burberry and charcoal gray cashmere that, glimpsed in the vapor trail of a passing boudin noir, it could have been the Left Bank.

In this case the crowds are for Rick Bayless, the chef who, after going cleaver to cleaver against a bunch of other big names, won the reality show Top Chef Masters last year. It’s a long way from where he began. Frontera Grill, which Bayless opened in Chicago’s River North neighborhood in 1987, enthralled a city that didn’t have a lot of experience with serious Mexican cooking. With its vibrantly colored walls and airy interior, the venture may have fit in with Chicago’s heavy rotation of theme restaurants (the convention business is huge). But Frontera wasn’t pretend-authentic or unabashedly fake, festooning the walls with sombreros or photos of archetypal abuelas; it was (and this is so rare) completely real—the reflection of a chef who had been in love with Mexico since his first trip to the country when he was 14.

Bayless went on to launch two other restaurants in Chicago on the same block as Frontera, but none is as sceney as Red O, his second foray outside the Midwest. No element has been left unamplified. The latticework exterior resembles the Bird’s Nest Stadium in Beijing. Inside, black leather seats hang from the ceiling in the bar, and a glass tunnel of tequila bottles connects a second bar to the all-white dining room, with its massive voile drapes, oversize earthen jugs, and a retractable canopy that looks like it’s about 200 feet in the air. No doubt about it: This is the domain of a star chef, an establishment that is clearly relying on the setting to fill the void on the many days that Bayless won’t be in town.

Despite the expense of the design and the abundant staff, it’s easy to feel as if you’re being processed amid the clamor of the joint. Waiters proffer $9 helpings of guacamole the moment you sit down, while the servers seem to think their fingers are part of the fixin’s and the busboys often pile plate upon plate as if you’ve overstayed your welcome in a second-rate banquet hall. “That has Bayless all over it,” the waiter says one night, pointing to the duck taquitos on the menu. Maybe he was just trying to be helpful, but the line lodges somewhere in the inner ear. Shouldn’t every item on the menu have the chef’s sensibility all over it?

The dense document is populated with the usual headings—ceviches, tostadas, enchiladas—each description larded with the names of farmers and producers to signal that this is not simply a spot to enjoy the standards we know so well but an improved, ingredient-driven variation. That’s understandable. Bayless is cooking in a metropolis where you can get mesmerizingly good tacos de cabeza from a passing truck or a stall by the car wash; he has to set his food apart somehow. Yet given the restaurant’s pedigree, there’s a surprising lack of authority to many of the offerings. The guac they push so assiduously could sure use a squeeze of lime. Wrapped in delicate tortillas, those taquitos the waiter recommended can’t hold up to the sauce they’re draped in; the result is akin to a sodden spring roll. Likewise, the splinters of tortilla in the tortilla soup become mush by the time the bowl lands on the table. The camarones al mojo de ajo seems to miss the point: Garlic, or ajo, is not a nuance in this classic; it’s the reason for being. The rice underneath the shrimp has a nice soupiness, and the spinach brings an herbal brightness, but the whole is devoid of punch.

When he’s on target, Bayless demonstrates a flair for compressing a dish’s heft without losing any of its essence. His sopes are not the usual disks but almost bite-size fried masa shells arranged on a strip of banana leaf. Whether filled with tender shredded short rib or sweet plantains finished with crumbled homemade cheese, they hew to the authentic but have been shrunken down, making them easy to share with friends. On the same miniature scale, finely diced sun-dried tomatoes lend a tangy freshness to the ceviche of serrano-laced woodland mushrooms. Piling the mushrooms onto curlicues of crunchy, thinly sliced plantain risks overwhelming the dish with trail mix connotations, but the fruit’s flavor brings a faint tropical note. You can sense the intelligence at work in as unassuming a preparation as the corn tortillas. In this kind of restaurant they’re not meant as a staple; Bayless’s are almost crepelike, and yet when you tear them open, they release a steam laden with the ancestral aroma of the corn from which they are made.

The names of chiles litter the menu, and Bayless knows how to use them. Each provides a different tone so that, blended together, they draw one another out—particularly in the simmered broths. The sauce of the tinga poblana, braised pork shoulder served with big, juicy bites of chorizo, radiates with the complexity of smoked chipotle. Black beans thicken the sauce of the Sonoma County lamb cooked in chile Colorado, tempering the heat. Spooned into a warm tortilla, the combination is potently good. With his subtle hand, Bayless transforms that happy hour favorite queso fundido—or melted cheese with homemade chorizo and roasted poblano chiles—into a pool of gooey perfection in a cast-iron pan.

Too bad more dishes don’t have that clarity and directness. What was brilliant about Frontera Grill was that it combined the twin strands of Bayless’s background. Having grown up in his family’s Oklahoma barbecue restaurant, he understood the pressures of production, but as someone who studied anthropological linguistics at the University of Michigan, he appreciated the importance of field research. To put together his cookbook that came out the same year he opened Frontera, Bayless traveled throughout Mexico, distilling family recipes to come up with his own. He was able to be commercial without ruining the humble intricacy of the food. But at Red O, those two poles are straddled awkwardly at best. He has one foot planted in clubland while the other tries desperately to keep a toehold on the deck of a departing Veracruz steamer.

You’re left wondering how connected the kitchen at Red O is to the culture it’s supposed to be honoring. Arugula on cochinita pibil? The slow-cooked, achiote-rubbed pork has the requisite tenderness and saturated flavors; it doesn’t need the tropes of California cuisine to enhance its resonance. Other flourishes simply overreach. Is there really any reason to weave the stalks of grilled green onions together? Instead of being lifted straight from the flame, they become the picture of artifice. A green glob, the halibut ceviche lacks any detectable acid and resembles the equally dull guacamole—it’s even presented in the same china tripod with the same fried chips. The tostadita, in which tomatillo salsa is drizzled over smoked salmon and goat cheese on a lightly grilled slice of baguette, is more puzzling. Its entire claim to being Mexican is in the sauce; substitute sriracha for the tomatillo salsa and, hey, why not call it Vietnamese?

You do discern a solid connection to the culture in some of pastry chef Nika Yazdani’s desserts, which incorporate elements that street vendors might sell. She sprinkles a brittle made of pumpkin seeds, peanuts, and sesame over soft-serve ice cream. She crowns tiny cubes of goat cheese cheesecake with clouds of caramel popcorn, bringing out the herbal notes of the hoja santa-infused sauce. Still, there’s that jarring tension between the genuine and the merely gastronomic: The deep red prickly pear sorbet is almost inedible because, in a stab at extreme authenticity, the fruit’s seeds have been left in. Meanwhile Yazdani’s otherwise dreamy buñuelos, rolled-out lengths of churro dough fried and dusted with sugar and cinnamon, wind up muddied by the sort of Kahlúa chocolate sauce you’d get at El Torito in the ’80s.

The cooking at Red O is rarely bad; by and large, it’s fine. It just doesn’t often deliver the oomph you can get at many modest Mexican restaurants around L.A. or engage in the dialogue between high and low that you experience at ambitious spots like, say, John Sedlar’s Rivera. There is no doubt that Rick Bayless understands and appreciates Mexican food, but I do have some doubts about his level of commitment to the restaurant. Look at the bottom of the menu and you’ll see the line “Mexican cuisine by Rick Bayless,” which sounds a lot like Target when it’s plugging a star designer. “We have him under contract for 13 years,” a waiter explained to me one night, and my heart sank. Is Bayless their consultant or their chef? This is the man who articulated something people didn’t even know they wanted until he created Frontera Grill. Now that he’s come to L.A., I was hoping for more.