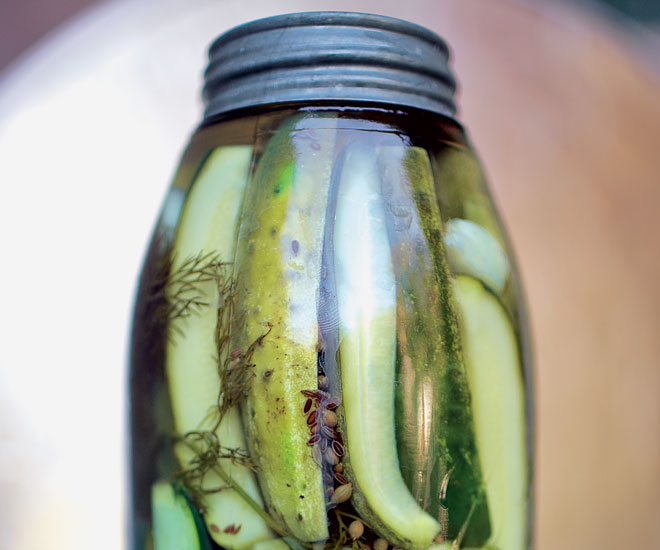 Last night downtown’s normally scrappy Grand Central Market was decked out in its frilly finest—embellished with flickering candles and cascading flowers—to host a Southern barbecue feast for some of the city’s biggest names in food and fashion. The occasion? The release of Kevin West’s first cookbook, Saving the Season.

West, a local writer and hobbiest-turned-professional canner, dedicates some 500 pages to the art of preserving, or what he calls “putting up,” complete with recipes, detailed explorations of technique, and a slew of personal anecdotes from his time spent growing up in the South. The result is something that’s so much more than just another guide to preserving. June, he says, is ideal pickle time, and his recipe for dill spears (or chips, if you prefer) takes advantage of the early season’s crisp cucumbers and flowering dill. These beauties were served last night along with a heaping pile of Texas-style smoked ribs from the Market’s soon-to-open Horse Thief BBQ. It’s a combo we highly recommend copying for next week’s Fourth of July festivities.

Directions:
1. Dissolve the salt in the water, and add the coriander, fennel, and dill. Set aside.
2. Scrub the cucumbers well, rubbing off any spines. Cut away a thin round from the stem and blossom ends, and slice lengthwise into quarters. Put the spears in a large bowl, and cover with the brine. Weight the cucumbers with a plate, cover the bowl with a kitchen towel, and set aside for 24 hours. If the bowl won’t fi t in your refrigerator, it’s fi ne to leave it out at room temperature.
3. The next day, pack the cucumber spears into two scalded quart jars, saving the brine. Measure out 2 cups of the brine and reserve. Strain the remaining brine through a fi ne sieve to capture the aromatics, and divide them between the jars. Tuck a dill head and two cloves of garlic into each jar.
4. Mix the vinegar and the 2 cups reserved brine, and bring to a boil. Pour it over the pickles to cover. Seal the jars, and store in the refrigerator for a week before using. For long- term shelf storage, leave ½ inch headspace when filling the jars, then seal. Process in a boiling- water bath for 10 minutes, or in a hot- water bath, between 180 and 185 degrees, for 30 minutes.

Note: Instead of spears, you could slice your cucumbers into round coins, lengthwise “slabs,” or bias- cut ovals. Make the slices 3⁄8 inch thick and soak them in the brine for 12 hours instead of 24.