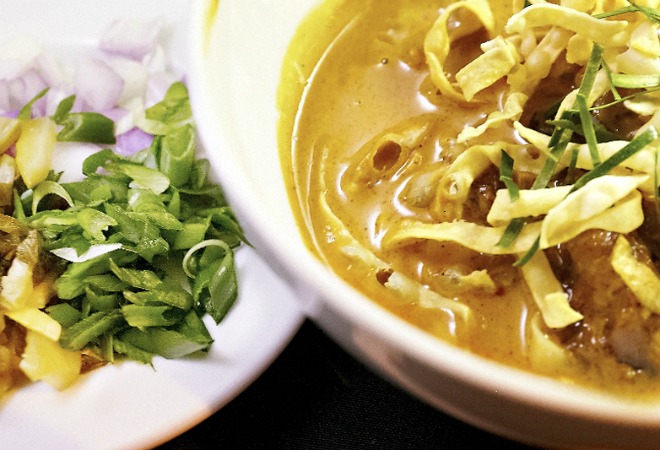 Get out your water guns! The Thai festival of Songkran begins this weekend. The holiday celebrates the official start of the Thai New Year, and along with paying respect to elders visiting temples, and honoring monks, it’s traditional to soak random strangers with water—in Thailand anyway. What began as a sort of ritual cleansing has today evolved into a full-fledged, country-wide water fight complete with balloons, Super Soakers, and more. There will be slightly less wet festivities throughout Hollywood’s Thai Town and at temples across Los Angeles, but we’ll honor the day by drowning ourselves in the rich, coconutty broth that accompanies the official dish of Chiang Mai: Khao Soi. Jet Tila, chef-owner of Santa Monica’s the Charleston restaurant and the inaugural U.S Culinary Ambassador to Thailand, remembers eating the turmeric-tinted, rice noodle soup (a dish so good it wound up on the cover of March’s Bon Appétit) with his grandmother and a child. “The preparation of this noodle dish is a clear expression of how to cook Thai food,” says Tila, “Because it contains the ‘yum,’ a Thai word that means the perfect balance of hot, sour, salty, and sweet.” Tila shares a recipe for a slightly altered version with beef tenderloin, yellow curry paste, and fresh flat egg noodles. Sawat di pi mai! (Happy New Year!)

Directions:
In a medium saucepan, heat three tablespoons of coconut milk on medium and stir in curry pastes and lime leaves. Stir-fry for about one minute until paste starts to brown and is thick and fragrant. Stir in remaining coconut milk into curry paste. Increase heat to high until boiling. Allow to boil for about five to ten minutes or until reduces about ¼ or until it coats the back of a wooden spoon.

To serve:
Separate the noodles into four bowls. Ladle six to eight ounces of the rich broth over each noodle bowl. Garnish with mustard greens, shallots, scallions, and cilantro on top.