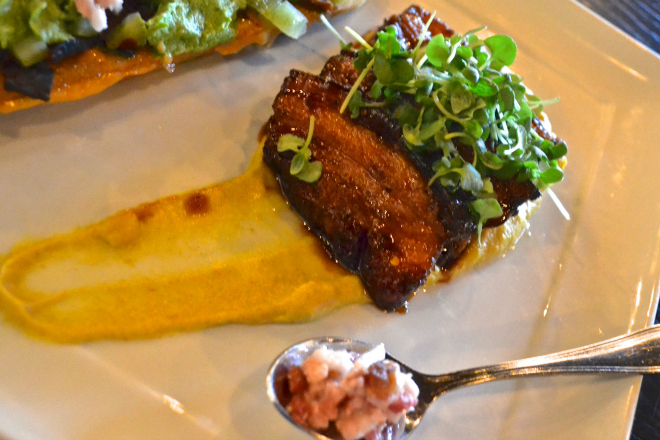 At Santa Monica’s Upper West, order the innocent-sounding pork belly and you’ll be presented with luscious slices of Hunan braised pork belly atop on a yellow curry-cauliflower purée. Pay attention: those striations of fat melt at body temperature, right as they hit your tongue.

The Spanish Fermin Ibérico hog—a sort of Kobe beef of pork—is responsible for the pork belly in question. More directly related to wild boar than to domesticated pigs, it feeds mostly on wild Spanish acorns.

Chef Nick Shipp uses a veal demi-glace on his variation on a Chinese “red cooked” pork belly, and a three-hour braise is all that’s needed to render this fatty meat meltingly tender. Served with a cumin-coriander yellow curry cauliflower purée, I see the dish as a balanced ode to East-meets-West.

The best part? The “chaser” spoonful of uncooked (but cured) Fermin Ibérico bacon bits that sit in front of the pork belly plate. The singular bite is at once creamy, sweet, and smoky, like a pork cocktail. Raw pork: Just do it.