Home Food & Drink The Ranch Offers a Daily Vegan Meal Plan, and Here’s What it... 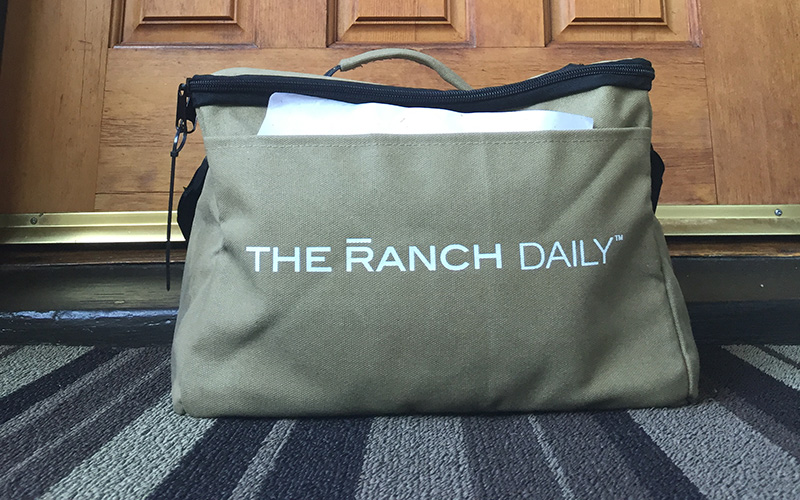 The Ranch Daily pizza arrived on my doorstep early in the morning, along with with the other menu items for the day—a blessing of three meals, and a curse because I’d have to wait hours to consume them all. The Ranch—Malibu’s famous wellness retreat—now delivers plant-based, nutrient-rich meals to your door. A three-day meal plan with breakfast, lunch, dinner, and two snacks runs $270, or about $30 a meal. It’s The Ranch, so it has to be good, right? I gave the three-day meal plan a try.

Breakfast: Cinnamon Chia Porridge and Berries
Breakfast arrived in a mason jar primed for Instagram. The porridge was topped with shredded coconut and studded with fresh raspberries, blueberries, and blackberries. It’s the kind of breakfast favored by Brentwood yoga moms who haven’t touched gluten in years. Lunch: Falafel Salad and Tahini Sauce
The falafel was well-spiced and definitely not fried and was served with an enormous cabbage leaf that I used as a faux pita because I am not above MacGyvering my lunch. Snack: Sesame Seed Cashews
Coated in a sweet chili sauce, the cashews vanquished the dreaded 4 p.m. munchies. I ate them in less than a minute. No judging. Dinner: Kelp Noodles Alfredo With Broccolini and Blistered Tomatoes
The pairing of cream sauce and ocean vegetables seemed unusual, like a desperate attempt to mimic a high-calorie dish. I was pleased to find the pasta was creamy and passed as “real” noodles, pairing well with the lemony broccolini. The Ranch Daily provides one side salad per day. The thick balsamic vinaigrette was tasty, but the spinach salad contained a mere three tomatoes. I’m a tomato person, Ranch. Snack: The Ranch Energy Bites
A dessert fanatic, I saved my second snack for after dinner. The
“energy bites” were like chocolate truffles, with a strong cacao flavor, bits of crunchy cacao nibs and the faint taste of berries. Breakfast: Spinach and Cheese Quiche
The Ranch Daily is a vegan meal plan, so labeling this meal a “cheese quiche” might be a bit of false advertising. Indeed, the potato-heavy “quiche” resembled a latke topped with sundried tomato and flecks of spinach. Someone intent on eating an egg-y quiche may have been disappointed, but the meal itself was tasty. Snack: Almond Butter Balls
One of my favorites. The flaky coconut exterior and chewy center reminded me of coconut macaroons—the Passover kind, not Ladurée kind. Lunch: Chickpea and Kale Salad
This meal is known as a Ranch favorite. The pickled onions, peppers, tomatoes, and lemon-wilted kale came covered in an Asian-style dressing yet retained freshness and crunch. The flavor profile was Sweetgreen-worthy, but I was left wanting more lettuce. I am also a lettuce person. Don’t get so skimpy with the lettuce and tomatoes, Ranch. Snack: Hummus and Seasonal Veggies
This dip wasn’t creamy enough to be called hummus, but it was redeemed by the quantity of fresh carrots, jicama and celery. Dinner: Enchiladas Verdes
Dinner needed to be heated, and I managed to burn my fingers on the oven in my haste to eat. The black beans and kale (what, your Mexican food doesn’t have kale?) were worth the pain. I expected the spice level to be wimpy, but the cashew pepper jack cheese and tomatillo salsa packed some heat. The side salad: arugula and shredded carrots in maple-mustard dressing. Breakfast: Ranch Slow-Cooked Steel Cut Oats and Berries
This was basically a hot version of the first day’s breakfast. My emailed directions said the jar to be heated via submersion in a pot of recently boiled water—a fussy instruction I attempted and then ignored in favor of the microwave. This angered the Ranch gods, causing the fruit to melt and bubble up frighteningly. The result wasn’t aesthetically pleasing, but it was warm and sweet and my favorite breakfast of the lot. Snack: Zucchini Chips
According to the menu my first snack of the day was intended to be seasoned nuts. In a happy mix-up I received veggie chips instead. Sliced thin, dehydrated and flecked with rosemary, I unconsciously inhaled them. Lunch: ‘Toona’ Wrap
Unlike some other ingredient replacements, this really tasted like tuna, and The Ranch pulled it off using sunflower seeds. The “toona” was packed with julienned bell peppers and pickled carrots inside a firm, chewy seaweed wrap. Dinner: The Ranch Rustic Pizza
The Ranch’s version is more akin to a flatbread; a thin whole-grain crust topped with marinara sauce, cashew nut mozzarella cheese, bell peppers and cremini mushrooms. If you’re eating these meals expecting exact replicas of your favorite dishes at half the caloric value, you’ll probably be disappointed. However, this dish was a great way to continue healthy eating while scratching a pizza itch. Snack: The Ranch Granola
Granola is always delicious, and this was no exception. The nuts, seeds and dried fruit were coated in a bourbon barrel maple syrup that gave it a gingery, cinnamon taste. Overall, The Ranch Daily was an easy (if somewhat expensive) way to stick to a healthy diet—the non-celebrity version of having a personal chef. If you’re interested: The Ranch Daily offer meal plans without breakfast at a reduced price. Customers can opt for meal plans of 3, 5 or 20 days, bundling days together or spacing deliveries throughout the month.