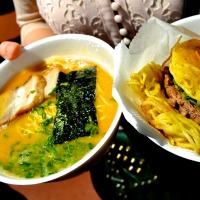 All self-respecting noodle-heads lusting for real ramen would have found themselves this past weekend at the Ramen Yokocho Festival. While thoroughbreds galloped around the Santa Anita Racetrack, the real action was at the 14 booths representing some of the world’s most popular ramen restaurants.

The longest lines—clocking in at about two hours of wait time—were in front of Japanese imports Mattou Seimen, Horaiya, Tatsunoya, and Tsujita Tokyo. Most offered a variation on the fan-favorite tonkotsu pork bone broth-style ramen with tender slabs of chashu pork, but Mattou Seimen set themselves apart with an Iron Chef Kenichi Cheng and Kiyoshi Kurihara collaboration that resulted in a Sichuan-influenced, spicy miso ramen topped with peppery ground pork, bok choy, and seaweed.

Local ramen chain Daikokuya spiked their tonkotsu ramen with bonito. Fujin grilled up their take on the Ramen Burger and commanded a line almost as long as Keizo Shimamoto’s original. Hiromaru from Las Vegas was the sole vendor making their ramen from scratch. They worked it into an Italian fusion bowl with tonkatsu broth.

My favorite of the fest came from the kitchen of Shalala, the only Northern Californian ramen house that attended the event. Shalala assembled a rich, creamy bowl of ramen featuring paitan soup brewed from whole chicken—including the gelatinous feet. The broth was satisfyingly thick and sticky—and rich with schmaltz.

The show stopper was at Jidaiya booth. This L.A. shop created the Ton-Toma L.A. Ramen which is an amusing mash-up of ramen and a taco. A tonkotsu broth is simmered with tomato then combined with ramen noodles, spicy ground pork, slices of avocado, and garnished with half of a crunchy taco shell. If ever there was a ramen that represented Los Angeles, this one just might be it.

This Brothless Ramen Is Perfect for the Sweaty Part of Summer