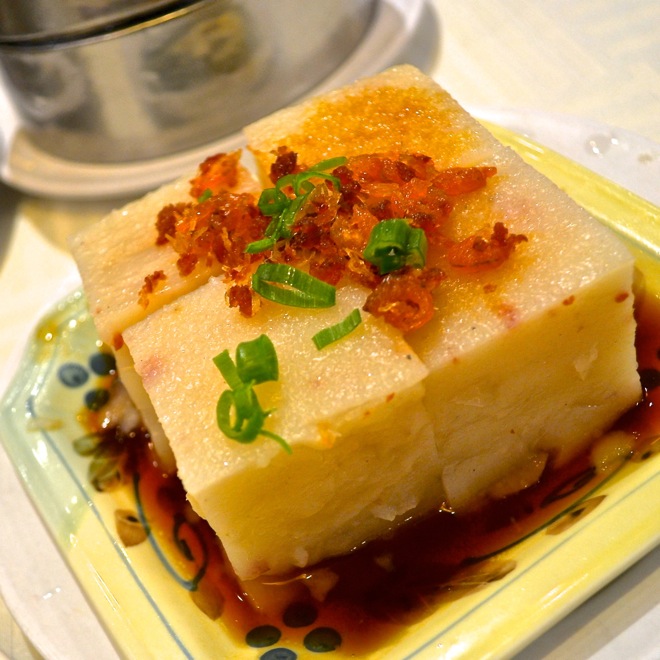 I grew up with dim sum. In fact, I was told that when I was still in nappies, I had a baby bottle in one chubby hand and a barbecue pork bao in the other. It was in L.A.’s Chinatown where I first snacked on various dim sum bites while my parents leisurely sipped perfume-y jasmine tea. I watched as surly Chinese ladies speaking Cantonese arrived at the table with their shiny metal steam carts filled with appetizing and diminutive treats, after navigating through a crowded seafood banquet hall like Danica Patrick driving a stock car around a NASCAR-sanctioned oval track.

Over the years, eating dim sum became a weekend ritual with family, and continued on with friends, but the food all seemed similar no matter where I went. Sure, some chicken feet were seasoned better than others, and I’d occasionally discover a rice noodle roll that was actually jam-packed with shrimp, unlike the anemic rolls I usually encountered, but it all became a bit boring, to be honest. Luckily, the radish cake I recently had at Sea Harbour Seafood Restaurant in Rosemead was just the happy slap I needed to remind me of how great dim sum can truly be.

My guesstimate is that 95% of dim sum restaurants fry their radish cake (or sometimes turnip cake), but at Sea Harbour, they’ve chosen to steam them. Of course, it’s hard to resist the crispy, browned exterior of the more common, fried radish cake, but Sea Harbour has compensated for the crispy texture and fried flavor by adorning its steamed version with salty bits of dried shrimp and smoky, fried lop cheong (Chinese sausage).

Beyond being steamed, the construction of the radish cake at Sea Harbour is really the artful distinction here. Sea Harbour’s radish cakes are thick, luscious cubes versus the thinner, rectangular kind most everywhere else. On top of that, whereas most dim sum spots serve their radish finely pureed and formed into a cake, Sea Harbour’s approach is more like that of a forcemeat, with chunks of daikon surrounded by a minced radish mash, sparsely speckled with the aforementioned dried shrimp. The result is a rustic texture coupled with a refined one, elevating it above and beyond any other radish cakes in the San Gabriel Valley.

And because their dim sum service is based on specific ticket orders rather than the more common steam cart pushers at other places that hard sell their har gow, Sea Harbor’s items come out much fresher. Now that’s pretty rad-ish.