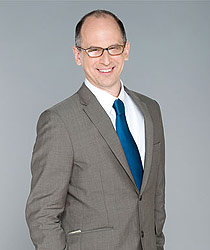 Spoiler alert: Last night, Providence’s Michael Cimarusti became the last L.A. chef to be eliminated from the Top Chef Masters semi-finals. We’ve still got Suzanne Tracht to root for in the finals (go Suzanne!), but there’s one more Angeleno to keep an eye on. James Oseland is the editor of Saveur magazine and maybe—ok, definitely—the feistiest of this season’s four judges. What you may not know is that he also spent a decade living in Los Angeles, sharing an office at the LA Weekly with none other than our own editor-in-chief Mary Melton back when she was just an intern. Small world! The six weeks he spent here while shooting Top Chef Masters had Oseland falling in love with our city all over again. He sat down with us to talk about the show, his time in Southern California, and where to score a good jelly donut and Thai Massage in one stop. The answers, below.

LAMAG: So, I didn’t know you spent ten years in L.A. When was that?

James Oseland: I was born and raised in San Francisco, and I’d always had that thing implanted in me—like, ‘Ugh, Southern California? Puh-leeze.’ I studied film at the San Francisco Art Institute, and then worked in experimental film for a number of years. But I eventually got tired of it and thought, ‘You know, I’m going to show them. I’ll move to L.A. and work in the real movie business.’ So I packed my bags and got a place in East Hollywood at Franklin and Vermont.

JO: The first time I visited, I took a train in from New Orleans and rolled into Union Station at, like, 6:30 in the morning. It was dawn and there were palm trees and blue sky. I walked through Chinatown and got on a bus that took me all the way up Wilshire to Westwood. I thought, ‘Wow, this is not the L.A. that I expected.’ There are still things that I find so hypnotic about the place.

LA: And then you ended up working at the LA Weekly…

JO: Yep. I got a job in the proofreading department there. I was still doing my movie stuff on the side, but increasingly I was turning to the Weekly for work, and I just really loved the experience. Working at the Weekly really taught me the craft of putting together a publication from the ground up. I loved the camaraderie, I loved the deadlines, I loved the challenge of fixing a flawed sentence. It was a new love discovered.

JO: Oh god yes. There’s probably not a week that goes by that I don’t miss some aspect of L.A. food life: Thai Town, tacos. During the last two years I lived in L.A., I would take these monthly sorties down to Little Saigon. I would go there by myself and spend six or seven hours going to supermarkets and learning, eating around, tasting this extraordinary food. This was in the early ’90s, and Little Saigon was not exactly little, but what it has grown up to now absolutely astonishes me.

LA: It’s amazing down there, isn’t it?

JO: I was there just back in March, and those supermarkets put Costco to shame! There will be practically a whole aisle dedicated to sticky rice flours. Fresh, not frozen durians and jack fruits—giant piles of ’em. Honestly, I travel a lot, and nowhere else in the world will you find these extraordinary global streams of cooking so fully represented. We have nothing even remotely similar here in New York City.

LA: How often do you get back here?

JO: I’ve been back to L.A. ten times since I left in 1993, but the time I spent working on Top Chef Masters was my most continued stay in the city. It really was a reunion with the place. I was there for about 6 weeks, and it was a trip full of wonderful sense memory. I started to explore culinary L.A. on my off days, when I wasn’t working on the show. I was overcome with that same kind of sense I used to have when I lived there, this sort of humbling but inspirational feeling of, ‘Whoa, look at all I don’t know!’ I’m the editor of Saveur. I’ve written a book about Indonesian food. I’m supposed to know everything, right? But then I go to L.A. and I’m reminded about how wonderfully little I know and how much more there is. It’s a universe, an absolute universe.

LA: Ok, so what were some of your favorite stops while you were here?

JO: I stumbled upon this Filipino turo-turo place one afternoon. It was in some crappy strip mall on Santa Monica maybe, near Vermont? I can’t remember the name, but I parked my rental car, walked in, looked at the food behind the glass and thought, ‘Wow, the food looks wonderful!’ I ordered just a regular turo-turo plate and ate this wonderful, beautiful, complicated food. I had been eating all this amazing food for Top Chef Masters, and I just wanted something soulful and direct, clean and smart.

A couple of days before that, I met a close friend of mine who lives in Silver Lake for a Thai massage on Sunset, right near Tang’s Donuts. Do you want to know a secret? I used to go to that place at 2 a.m. and get jelly donuts and chocolate shakes, alone—it was the most blissful food memory. Anyway, I found out that the lady who gave me a massage was from the Issan region in Northeast Thailand. I love that type of food and you can’t get it in New York at all. So I asked her, “Are there any places, other than your house, where I can get good Issan food?” She turned me on to a few restaurants, and I went to one—again, I can’t remember the name—but it was like being in Issan. Wonderful.

Also, I really enjoyed Suzanne Goin’s Lucques. I had been there before, but wow, what a glorious epiphany. Everything that came out was extraordinary, but the thing that blew me away the most was the basic garden lettuce salad that came out in the beginning, with what was essentially a homemade buttermilk ranch dressing and fresh-snipped chives. To see that kind of intelligence and dedication and sincerity put in to what could have been this plain old salad—wow, she’s really got it going on. I love her.

LA: Ok, so about Top Chef, what was your favorite dish of all the ones we’ve seen so far?

JO: There are a couple, but the one that immediately rises to the surface is Rick Bayless’ tongue taco. He made this very reductive salsa verde with tomatillos and probably a bit of lime juice too, though I couldn’t swear to it. And there was the tongue as well as griddled chorizo and it all made these wonderfully perfect soft tacos. Of all the dishes it was the most pure, intelligent, soulful articulation of really good cooking.

LA: Everything has been so darn friendly so far on the show. Is it ever going to get competitive?

JO: Stick around for the final four episodes. Once they’re working with just the same group of people in the finals, things will really shift.