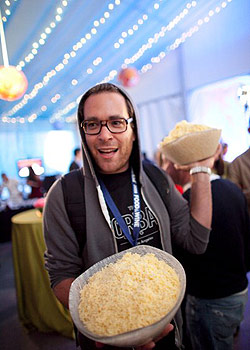 Yesterday, chef Ilan Hall announced on Twitter that his new restaurant The Gorbals will start walk-in-only dinner service tomorrow night. (They’re taking reservations for Saturday and beyond.) Ever since the menu was publicized touting bacon-wrapped matzo balls and such, I’ve had friends and coworkers coming to me with questions like, “What the??” or "Is that even legal?!" To find out, we went to the source, asking the chef about his new space inside downtown’s only half-gentrified Alexandria Hotel, his wacky menu, and who he’s rooting for on this season of Top Chef. (Hint: They’re not local.)

Lesley Bargar Suter: First and foremost hello, and congrats on the new restaurant. How exactly did you come to decide on the Alexandria Hotel space? It’s certainly unique.

Ilan Hall: I was getting a tour of downtown with Justin Weiss of the Central City Association, and he ran into a buddy of his on the street that was the building manager of the Alexandria. He showed me the space and I fell in love.

LBS: Is there a general theme or concept behind the food? Haggis and shepard’s pie on the same menu as a cucumber salad with zahatar. If there is any structure, it certainly seems loose.

IH: My father is from Glasgow and my mother’s from Jerusalem. I’ve studied Italian, French, Spanish, and contemporary American cuisine. I feel that sticking to one style would just not be me. I make food that I think is delicious and seasonal. Those are the only boundaries that I give myself.

LBS: OK, coming from a half-Jew, I totally appreciate matzo balls wrapped in bacon and pork braised in Maneschewits (an underused cooking wine, if you ask me). But still, what the heck?! Why the culinary blasphemy?

IH: The only problem with Jewish food is that there is not enough pork fat injected into it! Seriously, I love the food I grew up with—like Grandma’s matzo balls—and making it taste better by adding different ingredients, blasphemous or otherwise, is the best way to both honor my culinary heritage and serve great food.

LBS: Remind me, what does “the Gorbals” mean?

IH: The Gorbals is the neighborhood in Glasgow where my father was born and raised. It was traditionally home to a large immigrant population, including Jews, and the ‘melting pot’ personality of the city inspired my menu.

LBS: So, any opening-week jitters?

IH: The answer is definitely YES, there are butterflies in my stomach. But I have a great team and people really seem to be loving the food during our trial runs which makes me calm down some. And the amazing bottle of Scotch my dad gave me as a gift for opening the restaurant helps too.

LBS: Speaking of booze, I’ve seen a lot about your food menu, but can you talk a bit about the beverage service?

IH: We have a full liquor license. Lots of scotch and a focused line of booze. Ten reds, ten whites, five rosés and only some select brands that are my favorites, like Hendrick’s!

LBS: Have you been watching the new season of Top Chef? Are you rooting for anyone?

IH: Brian Voltaggio. He is my old boss and one of the greatest cooks I have ever met. I hope he takes down his brother.

LBS: At this point, are you so over the Top Chef people calling you in? It seems like every series now has a scene with Ilan Hall as a judge. How does that work? Is it like, “Hey Ilan, listen, we need you to come in again…”

IH: Nah, I really do love the show and it’s always fun being on the other side. I have a great relationship with the crew and they likely use me so much because I’m local….and I’m opening this awesome new restaurant now.