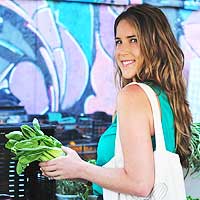 We’d be tuning in to tonight’s season premier of Top Chef Masters no matter what. But finding out that local food writer and friend of the magazine Krista Simmons is this season’s new judge? Well, now we’re hooked. We reached out to Simmons by phone shortly before she flew out to tonight’s big Vegas premier party to find out what it was like to sit next to folks like Ruth Reichl and James Oseland day after day—and how she survived a whole month in Vegas.

—
How did you get cast as a judge?

KS: Well, I actually was working still at the L.A. Times with their community newspapers last year, and I had just found a new gig as the food editor for a website and was very excited for this new job. Then, all of the sudden I got an email from the casting producers at Top Chef Masters asking if I wanted to come in for an audition. Of course I freaked out and said absolutely, because I used to actually show track Top Chef for the L.A. Times and I’m a big fan of the show. Even having the opportunity to come in and audition was really cool. It went really well. I just had to sit there on camera and talk about food and the L.A. food scene. That’s something that obviously comes very naturally to me. I rambled on probably too long about my likes and dislikes in the food industry, but apparently they liked me because they called me back. We went to round two with Dan Cutforth of the production company Magical Elves and apparently he dug me too, which I was very honored by. And I got the gig! I actually had to turn down the other job because I had to be in Vegas for a full month.

LAMAG: What was it like to be a Vegas girl for a month?

KS: It was really intense. Vegas never sleeps and it’s full constant stimulation and lights blinking and slot machines flashing and it’s loud and smoky, but it’s also a lot of fun. Especially at the Cosmopolitan. To be at that hotel for a month was amazing. I got to see a lot of great concerts and eat a lot of great food with James Oseland and Francis Lam and Alan Sytsma from Grubstreet and Ruth Reichl. It was just really surreal, honestly. Getting to dine with those people was a pretty incredible experience.

LAMAG: Who were you most intimidated by?

KS: The obvious answer would be Ruth Reichl and James. They’re a tie, I think, because they’re both sort of food legends, especially when it comes to writing. I really admire the work that they do. I travel a lot and I try to write about the fusion of food and travel as much as possible. Saveur has always been a publication that I really respect in that way. But to be completely honest, it was Curtis Stone. He’s a total hottie. Oh my god, he’s a dreamboat. We had our first night on set and I’m just looking up at him and his giant blue eyes and I’m just shaking and trying not to make a total fool of myself. But I think I managed to do ok. We’ll see on Wednesday!

LAMAG: There’s usually some distance between you and a chef when you write about them. It’s a totally different thing to say what you think to their face. How was that experience for you?

KS: Oh, gosh—that was really difficult to get used to because not only are these chefs, and you’re tasting something that’s very personal to them, but they’re also master chefs. This is Top Chef Masters, so these people own multiple restaurants and have been in the industry for many years. So, I imagine it was difficult for them to take criticism from someone who is so young. I was very aware of that. It was hard to get used to. You have to handle it like you would when you’re an editor. You lead with the positive and follow up with the negative so that people don’t get quite so offended, and they may see your criticism as being more constructive.  I think we both had things to learn from each other. I learned a lot throughout the experience and I think I improved on camera throughout the whole season, and I saw that growth and development in the chefs as well. You know, they are masters and they do own restaurants, but a lot of the times, because they are in the managerial position, they’re not on the line every single day. They’ve got cookbooks and TV gigs and running a restaurant to worry about. So in that way I saw development and growth within them. The camaraderie, too, was great to watch—to see how the chefs form their own little kitchen brigade within the show. They’d form bonds and would help each other. It was a cool experience to watch and be a part of.

LAMAG: Was there much infighting among the judges?

KS: We definitely had moments of conflict. Again, food is a very personal thing so there definitely were points of contention where we might not have agreed on things. But in the end the winner was someone we could all feel very strongly about. It was a really good season. Masters is sometimes tricky because the chefs respect each other so much that there’s not a lot of drama. They play nicey-nicey. But you could tell that these chefs were very competitive and really hungry to win. I’m excited to watch it, to be honest with you. I have no idea what happened. The Quickfire is only half of the show. I don’t see the character development. I don’t see anything aside from those elimination challenges. So, in a way, I’m less biased because I don’t have any connection to the characters. It’s solely based on the food. Which is why I think the show is such a great show because it’s really based on the quality of the cooking, not on personalities.

LAMAG: What was it like to come into this respected group of judges as a relative unknown?

KS: I just tried to endear myself to them as much as possible and they were really receptive to that. Ruth and I actually went vintage cookbook shopping at this really awesome little bookstore off the strip called the Amber Unicorn. It was totally surreal. James and I are still in contact and I actually ended up working and writing for some of these people afterward. I’d say professionally it was a really great experience. James and I knew each other before, and so it was nice to have him around. Ruth seemed receptive and Francis was great. We’d really dine out together and hang out outside of the shoots, and hopefully they respect me now after all of this. I know at least we’re friends, so that’s a good sign!

LAMAG: The sesason was shot almost a year ago. Are you so ready for this to finally air?

KS: Oh my god yes. It has been so hard to keep my mouth shut. You have to sign all sorts of agreements and basically sign your life away. I couldn’t even tell people that I was in Vegas for that month. It was just like I disappeared off the face of the planet. I just stayed off social media and I couldn’t say anything. I travel a lot anyway so it’s a normal thing for people to see me disappear like that. Hopefully nothing serious ever happens because I would like people to wonder where I am.

LAMAG: Were you bummed that there weren’t any L.A. chefs this season?

KS: Yeah, I think Chris Cosentino represented the west coast pretty well, but I was bummed too. But hopefully it’ll get Angelenos inspired to go out and travel and experience these chefs’ restaurants all around the country.

LAMAG: So, you’re attending the premier party at the Cosmopolitan tonight. Are you ready to go back?

KS: Oh man, yes. That hotel is so ridiculous. I really love it. It’s the only place I would actually want to live in Vegas. Otherwise I would have shot myself. I love the city as much as anyone else—I like to party and have a good time—but I can usually only tolerate it in small doses of about two to three days. If it were anywhere besides the Cosmo I would not have survived. I also discovered a dining scene off the strip and I feel like that’s something people don’t really get to experience much of. There’s a really amazing Chinatown there, there is some really excellent Thai Food, and the Amber Unicorn bookstore I cannot speak highly enough of. They have maybe 20,000 to 30,000 cookbooks within their collection of vintage titles, reasonably priced, and some first and second editions of M.F.K Fisher. It’s really cool to walk through there.

Good luck with the show Krista, we can’t wait to watch!

The premier of Top Chef Masters airs tonight at 10 p.m. PST on Bravo.