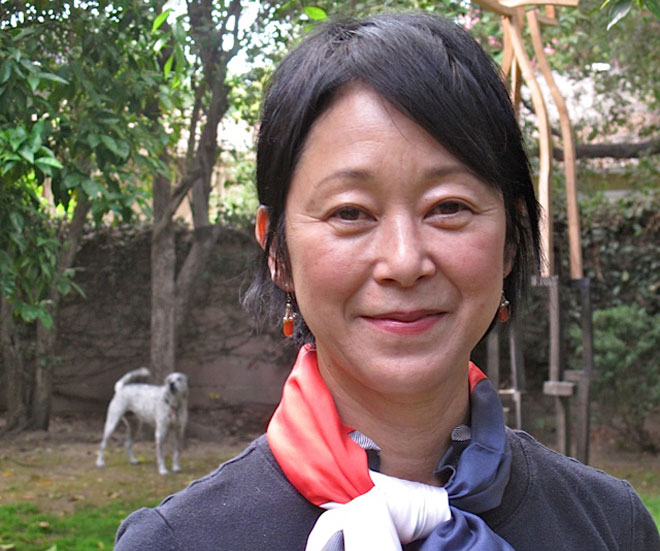 How did you get into the business of grains?
I had been in the film industry for more than 20 years. When you’re in the movie business you get to travel a lot and eat well, and it’s great—I enjoyed it very much. But I saw the market changing—it’s not the same. So, it felt like a good time, and a good age, to make a transition and focus on the stuff that I really wanted to do. My father thought I was crazy. What happened to my film career!? What are you doing?! But it was so therapeutic.

Why soba?
I love soba! I’m from the Tokyo region and my parents still live there. I’ve always enjoyed eating soba, but I didn’t know you could actually take classes to make it. Then I found out there’s a school in Japan where you can learn, so I took a class and I liked it. Then I went back and took a more comprehensive class. All together I took classes every day for two months, and I did the same things every day: learning how to cut things, mix noodles, make noodles—repetitious stuff. I also went to the fish market every day. It’s not just about noodles, it’s about selecting ingredients.

How did you transition this into a business?
Common Grains started last December, when I did a pop-up soba restaurant at Bread Bar. I’d done pop-ups before with one of my soba teachers, but those didn’t have a name. Then, Mr. Kanai called me. Mr. Kanai is the 89-year-old head of Mutual Trading Company, a huge Japanese importing company and one of the men responsible for bringing sushi to the U.S. He’s been really wanting to do something with soba, and last December he called me and said,  “Look, there’s a Japanese rice miller who just got this grant to promote grains—buckwheat and rice—and since you do soba, why don’t you see if you could work with these guys and help them?” So suddenly, what was just a meditative, therapeutic thing for me had a backup business side to it. I never thought I’d have something like that but it just came.

Why are grains so central to Japanese cuisine?
Well, in Japan we don’t have the land to raise cattle. But there’s fish—there’s always been fish. But not everybody eats tuna that way. I didn’t grow up eating sashimi every day, no way—it’s too expensive. We ate grains. Japanese people are actually very frugal. So, in Japan grains are the centerpiece. You always think about the grains first when you plan a menu. When you think about your dinner you don’t think about the steak first—you think about the grains and what you can do to enhance the flavor of the grains. I’m not a vegan or vegetarian, but I think you should put the grains in the middle of your plate and work around it. I’m just trying to get people to think about grains.