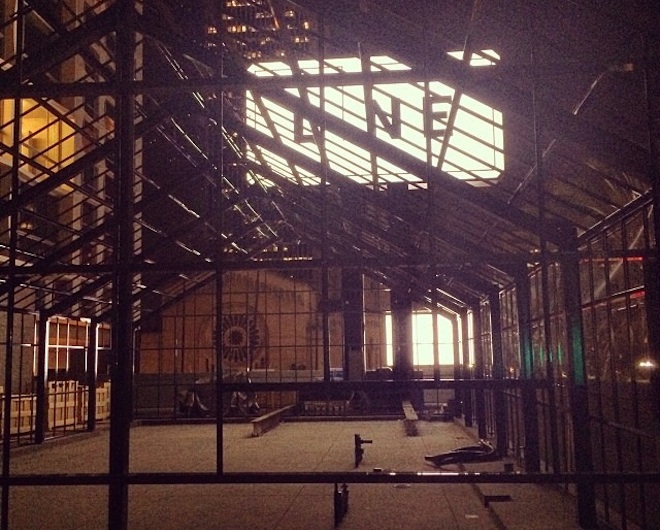 Though The Line, the swanky new hotel from the guys behind New York’s NoMad, opened last month, its food and beverage operations are still mostly in development. Roy Choi is the main man behind the eats and drinks here, so expect the unexpected. The main restaurant is called POT. There’s POT bar (which is now open) and POT cafe (a mixture of Taiwanese bakeries, Seoul food markets, and Salvadorian panaderias) on the same level, near the restaurant’s main lounge and lobby. Drinks are served next to a bin of green army soldiers. Snacks include the same bags of popcorn you can get from street vendors outside. Room service is called delivery, because it’s going to be served delivery-style. For details on everything else, we had a drink with Choi at his new bar to talk about this project’s inception, evolution, present, and future. How did you get this gig [doing food and beverage for The Line Hotel]?
It’s by the Sydell Group out of New York. They approached me, and I turned them down twice—so I guess the third time’s the charm. [Laughs] They came at me from all different angles. I used to work in hotels, so it was just like I wasn’t ready to come back home yet, you know? It wasn’t because it was Sydell. But then my core team said, ‘You know, you can do it your way. You can bring a new voice to the things you already know how to do.’ So, coming in as an owner of the F&B side is different. I am able to express myself. I’m back in Ktown making Korean food.

Did you originally want to do this many concepts, including room service?
I only wanted to do POT at first, the restaurant. Again, my team talked me into it. [Laughs] They peer pressured me into the whole thing. I was cool with my life. I don’t have any regrets in doing this, but I was cool just hanging out, running the restaurants on the Westside. But then once they convinced me, I just opened up my sensors and saw this place, this hotel, as a place for the people, for Ktown, for anyone and everyone who loves Kogi to A-Frame to Sunny Spot. I hope people know that because I’m involved they’re not going to ever feel out of place like they might at some hotels. They’re always going to be welcome, no matter who they are or where they come from.

I realized that this was an opportunity to make this a gateway, a bridge, to challenge the stigma of hotels. I felt like the whole place, especially in that it’s above a Metro line, that it could become a community center. That inspired me.

How did you meet cocktail chef Matthew Biancaniello?
Natasha [Phan, Director of Business Development] found Matt. I don’t go out to bars much, so I had never met him before. But Natasha has been working with me for a very long time and she knows that if I have an idea, she’ll lay out four or five options for me. She knows what I’m looking for. As I was describing this concept of the community center, the idea of a bar came up because bars can be like community centers too. But we wanted it to honor the neighborhood. I don’t know as much about drinks as Matt does, but wanted someone humble enough that would know that this wasn’t just their place. Matt is like that. We met at A-Frame and Sunny Spot a few times and hit it off. I realized we could work well together. But I always knew that this bar had to be full of drinks Koreans would recognize. This was always meant to be just like a high end bar in Seoul. There would be a Fuzzy Navel and Tom Collins. And I heard Matt was a vegetable eat-your-drink kind of dude. So, he brought these to life, kind of updated them. And also he’s going to fit perfectly when we finish what we’re doing upstairs.

What’s upstairs?
The vegetable restaurant. The Commissary [see photo, above]. I call it a produce garden restaurant. There will be a garden up there, and you’ll be eating in the garden. It’s a vegetable focus, but not vegetarian. I just want to make a restaurant where I’m using mostly vegetables and fruits and cooking them like I would.

Tell me about POT, the restaurant.
So, POT bar is in the lobby here, there’s a cafe there, and POT the restaurant will be behind the bar, behind this wall. It’s a Korean restaurant and was named for hotpot, the dish. We’re going to serve food that you double dip and enjoy together with friends and family. I think it’s going to be killer. If we pull it off, man, you guys are going to want to eat here every day. There are people in Koreatown that eat at the same restaurant three times a week. I want POT to be like that. Where people can go day or night. Where it’s about the food. POT the bar represents all of Ktown’s neighborhood markets and bodegas. We’re serving cheddar jalapeño popcorn and candies and toys and the stuff you’ll find on the streets here.

People are going to start talking about how The Line is gentrifying the neighborhood. What’s your perspective on that?
I’m used to that. I’ve been running Kogi for five years. I’m used to feeding everyone and anyone. To answer that question… that’s what I do. I take the unfamiliar and make it familiar. I have no delineation between who it is that I feed. Kogi goes from San Clemente to Oxnard and every neighborhood in between. We’re all about bringing people out of their ‘hood. So this is meant to be familiar to everyone in a way.
Just because you’re Korean doesn’t mean you can’t eat my food. Just because you’re not doesn’t mean you don’t. If you look at this bar from the outside, it looks like a bar in Ktown. For me, its a gift to the neighborhood, to the people, a gift to myself to look at my own heritage and my own identity and bring my own touch you it. I’m Korean but I wasn’t raised in Korea—does that make this any less authentic? This restaurant is looking at that dynamic. We’re a Korean restaurant in Ktown. But there are so many of us now, so many first and second generation Koreans. I was raised in a Korean restaurant [see Roy Choi’s L.A. Son]. So part of POT is an homage to my mom’s old place, Silver Garden.

Is this sort of like a homecoming for you?
My number one goal is to tie it all together. Yes, it will change the neighborhood, but it was always in consideration of the neighborhood. It will be familiar and unfamiliar to everyone, but affordable to all. Everything was designed with Ktown in mind. We have really great wines on the list for people that want really great wines, and then we also have Fetzer and Lancers—it’s what my mom would want to drink. Whoever you and wherever you’re from, I want you to feel like you belong here. If you drink wine or don’t drink at all. Our tap beer is all Latino and Asian. There are little things people are always going to pick out. But basically, I’m not worried about how this changes Ktown because I’m fucking from here. This is my home.