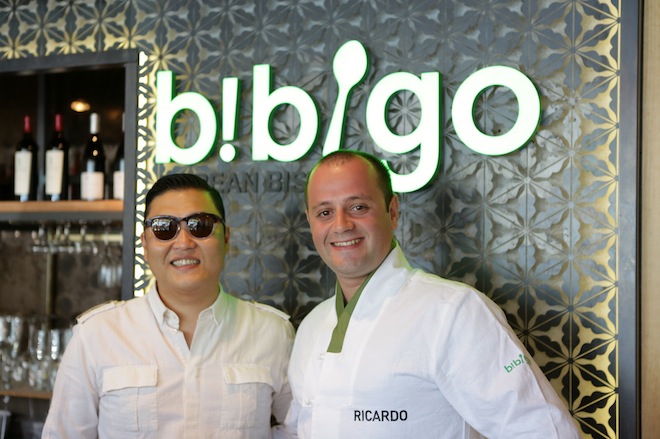 Back in April, after achieving record shattering views on YouTube for his “Gangnam Style” music video, Korean-crossover superstar Psy decided he needed a personal chef. And when you’ve become a household name, why not turn the search into a marketing asset? Psy teamed up with Bibigo!, a modern, casual Korean restaurant concept, to launch a chef search contest. The winner would be Psy’s chef for a year. From a pool of 350 contestants, chef Ricardo Caput of Brazil was chosen by Psy as the winner. So we had to know—what’s cooking for Psy like?

Congratulations on winning the competition to become international pop superstar Psy’s personal chef! When you found out you won did you perform any kind of dance? No I couldn’t. At that exact moment, I was protesting in the streets against the low governmental investments in educational systems in Brazil. I was happy to know I had won but it wasn’t the right place to dance.

Just to get this question out of the way—and I’m sure you’ve been asked this as many times as Gangnam Style has views on YouTube—but can you do the Gangnam Style dance? And was it a job requirement? No I can’t. I did try it though… but by the end of the day I realized I should focus on my cooking skills.

What types of food do you enjoy cooking? Do you have any signature dishes? When I first started cooking I enjoyed Brazilian, then it was Italian, and now, of course, I’m really into Korean cuisine.

Where did you work as a chef prior to becoming Psy’s personal chef? I was working in Brazil at a gourmet pub called Obardo, doing my thing, mixing traditional Brazilian food with everything I have learned on my travels. I’ve been working on my own style for sometime.

You’re from the Brazilian state of Minas Gerais. What style of Brazilian cuisine is Minas Gerais known for? We are very authentic as we have traditional ingredients and recipes appreciated everywhere in Brazil. But most of all, we make the best cheese you can find in Brazil.

Is there a Korean food influence where you are from? No. Not at all, actually I had no knowledge on Korean food before and all I know I’ve learned from the Bibigo! chefs in Korea. They have a very qualified team that taught me a lot.

What similarities do you find in Brazilian and Korean cuisine? In Minas Gerais we do love pork and we use garlic as much as they do in Korea.

What is Psy’s favorite comfort food? He likes authentic Korean food. I’d say he was very happy with the Galbi dish (char-grilled short ribs) I’ve cooked for him.

When did you start cooking? I’ve been working as a chef for eight years now. It all started on a trip to London to improve my English. I ran out of money and I decided to get a part time job in a restaurant as a “kitchen-hand,” and as soon I went back to Brazil, I enrolled in culinary school.

What are your favorite Korean foods? I haven’t disliked a single thing! But if I had to pick one I’d have to say Bibimbap.

What is your opinion of the Los Angeles food scene? There are two things I don’t understand: Why there is not one restaurant in L.A. among the 50 best restaurants in the world (according to S.Pellegrino’s list) and why there is not a Michelin guide for L.A.

Elvis was famous for craving a peanut butter, banana, and bacon sandwich. Does Psy have any unusual or extravagant meal requests? No. All he wants is authentic Korean food. He wants a dish that brings his mind and soul back to Korea, no matter where he is.