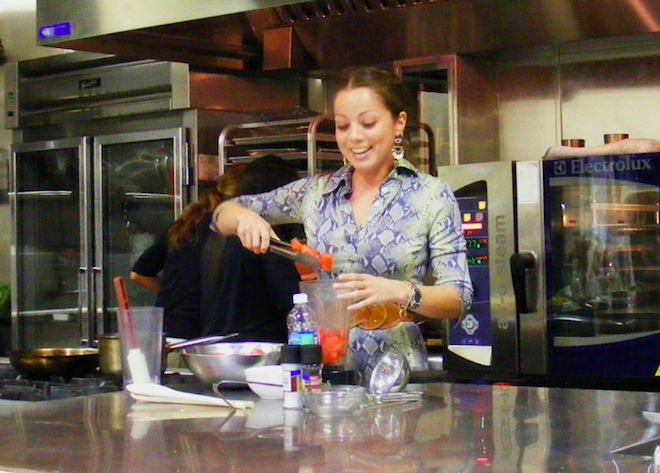 I caught up with Food Network’s chef Marcela Valladolid to talk about Dia de Los Reyes (Three Kings Day), where Mexican and other Latino families vie for the slice of Rosca de Reyes, or King’s bread. Inside each rosca is a tiny toy baby. Tradition has it that whoever gets the slice with the baby in it has to throw a tamale party on February 2: Día de la Candelaria) to officially conclude the holiday season.

Between being a full-time mother, hosting multiple shows—including FN’s Mexican Made Easy, CBS’s American Baking Competition, and now FN’s new talk show, The Kitchen—and running her own tequila label (Hacienda de la Flor), Valladolid is showing no signs of slowing down in 2014. In fact, it looks like Valladolid’s share of the rosca is getting bigger and bigger.

What is your Rosca de Reyes tradition, and what kind of tamales will you be making if you get the baby?
We used to all get together at my tia (aunt) Laura’s house in Tijuana, but now that my sister and I live in San Diego, we all go to her house. Our family and friends get together–she makes Mexican hot chocolate, and lines the kids up from youngest to oldest, to cut their own slice, and while everybody is gathered around the rosca she explains the meaning (the hiding of the baby Jesus) and the purpose of the 3 Kings. It’s really beautiful, and she’s such an amazing host. My fave tamales are pollo en salsa verde(chicken in green sauce) with TONS of crema (cream). TONS!

How did The Kitchen come together, and how will it be different from other talk shows?
How it came together?–I’m not sure, but they were looking for hosts with different food perspectives and we certainly are [different]! Honestly we couldn’t all be more different. They (Geoffrey Zakarian, Jeff Mauro, Sunny Anderson, and Katie Lee) are all so talented and that’s what’s so great about it. We just want it to be very relaxed and fun with approachable recipes. We’ll have easy and yummy meal solutions, talk about food trends, and have fun conversations–all revolving around food.

You’re now the most prominent Mexican chef on television. How do you feel about that?
No pressure—honestly, I’m just cooking the food my mom made me while growing up in Tijuana. I’ve been really fortunate and I’ve just tried to focus on the work and getting people to see Mexico, its food and its culture in a slightly different light. It’s tricky with Mexican food because a lot of our recipes are so deeply rooted in tradition and Mexican history. That’s a heavy responsibility! I try, to the best of my ability to share the love I have for the country I grew up in.