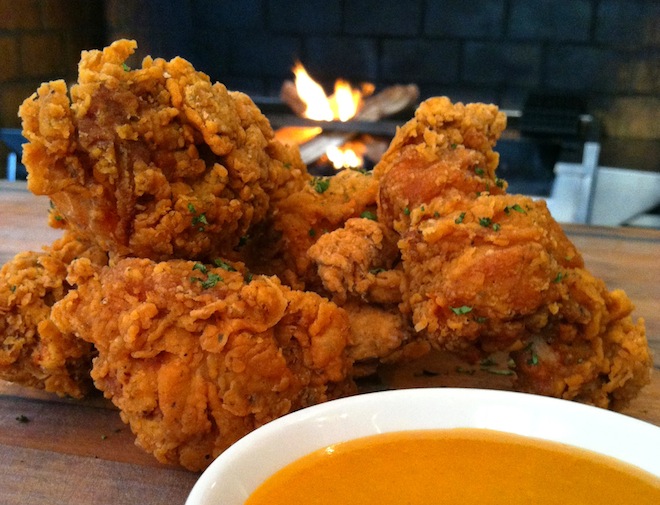 Seems like fried chicken has really grown in popularity in L.A. Why do you think that is? Just wait. Several high-profile chefs are jockeying to open fried chicken concepts in L.A. In the meantime, we’ve already got a wealth of great options, from simple Southern yardbird to gochujang-tossed Korean-style chicken and savory riffs on Japanese karaage. Ultimately, each representative culture recognizes the comfort and joy in devouring juicy, crisp-crusted chicken.
Fried chicken is generally thought of as a quintessentially American food. But other cultures fry chicken too. What’s your favorite non-American version? In addition to the great fried chickens you’ll find at the Food GPS Fried Chicken Festival, some of which are available at participating restaurants, others created just for the event, I enjoy a number of other fried chicken dishes around L.A. Additional highlights include Tomo Ueno’s ethereal wings at Izakaya Bincho in Redondo Beach, Kouji Yamanashi’s bone-in karaage-style fried chicken at Tokyo Fried Chicken Co. in Monterey Park, and Flossie’s classic Southern fried chicken in Torrance.
You travel all over the country for food. What region in the country has your favorite fried chicken? Clearly the South, where fried chicken is practically a birthright. Maybe it’s nostalgia, but I still daydream about the fried chicken in Nashville. During my college days at Vanderbilt, I went to lunch every Tuesday at Monell’s, a converted 19th century home near the Tennessee state capitol with communal seating that could include politicians and country stars, all passing fried chicken and sides to their left. Prince’s Hot Chicken Shack was also outrageously good, coated with cayenne, pan-fried in a cast iron skillet and ferociously spicy.
Outside of L.A., who do you think is a fried chicken master? The best fried chicken meal I’ve enjoyed is probably still at Stroud’s Oak Ridge Manor in Kansas City. This is the quintessential American fried chicken, sporting crisp, bronzed skin that locks in the bird’s savory juices. Better yet, the meal includes incredible sides: fluffy mashed potatoes with pepper gravy, green beans cooked with pork, and a basket of hot, addictive cinnamon rolls.

The Food GPS Fried Chicken Festival takes place this Sunday, September 15 from 4 p.m. to 7 p.m. at LOT 613 in the downtown L.A. Arts District. General admission is $55 per person in advance or $65 at the door.