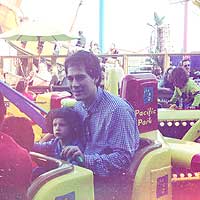 More so even than its nemesis Mother’s Day, Father’s Day is a particularly food-centric holiday. The mind immediately goes to large hunks of animal cooked over flame, beers slugged in La-Z-Boys, and fine scotches sipped among things made of rough-hewn wood and leather. Joel Stein, Los Angeles magazine’s Intolerable Foodie and author of the new guide to manliness, Man Made, happens to be a father himself (that’s him in the picture with his son Lazlo “I’m only three but I’ll eat ‘brainaise'” Stein). All of this makes him, in effect, a Father’s Day expert. We asked Stein to tell us a bit about the celebration of all things paternal and the foods that go with it. Oh, and his book. No way around that one.

Joel Stein: It’s just a bunch of guys being babies about Mother’s Day. I don’t think we need Father’s Day. Books about the Presidents sell themselves without it.

LAMAG: What do you usually do for Father’s Day?

JS: Every year, my dad asks for a letter instead of a gift. Which has devolved into an email. Which in the last couple of years, devolved into me not doing it at all. But I will this year. After about 20 of these it’s hard to find new things to say about our relationship, but now that I have a kid it’s a little easier. I’ve always appreciated him, but I appreciated him more as I got older and saw how lame a lot of fathers are. And now I appreciate him even more when I see how lame I am as a father.

LAMAG: Do you enjoy celebrating Father’s day more as a father, or as a person with a father?

JS: I think I’m supposed to like it more as a father, but I still think of my dad, not me, when I think about father’s day. Maybe that’s because my son is three. But even when he does celebrate it, it’s going to be that forced kind where his teachers or his mom make him draw me something. I don’t think I need that.

LAMAG: What would be your ultimate Father’s Day meal?

JS: It’s summer, it’s manly, I’d like to have great barbecue, like Texas Hill Country barbecue or North Carolina barbecue. Grilling stuff is a pretty good second choice, though I’m not a huge steak or burger guy. So I guess I’d grill a branzino or something, which seems less manly. It’s lame that we have to kill animals to feel paternal. Maybe a few years from now I’ll be making red lentil cakes for Father’s Day.

LAMAG: What do you think you’ll actually be eating on Father’s Day?

JS: I’ll be on long flight with my family, so something pretty lame. Hopefully I’ll remember to pick up something for the flight beforehand, but I forget a lot. Really, though, best case scenario it’s a Father’s Day eggplant wrap from Trader Joe’s.

LAMAG: What would be your father’s ultimate Father’s Day meal?

JS: My dad doesn’t really care about food. He likes the idea of food, though, so he tends to like rustic European food. But nothing with anything weird in it like pork. So the last few times I’ve seen him I’ve made him bouillabaisse (heavy on the fish, light on the shellfish, which he doesn’t like.) I buy frozen fish stock, which is lazy and lame, but it still comes out pretty well. I also make him a challah chocolate-chip bread pudding, which is easy. It’s just French toast without the work of flipping the bread.

LAMAG: Why is grilling meat considered such a Dad thing? Do they hand out barbecue tongs at the hospital when your kid is born?

JS: There used to be forceps, which are tong-like but they didn’t like the dad’s using them. They just let the dad’s cut the umbilical cord, which I believe we should have to do with our teeth. Grilling meat is pretty elemental: Meat, fire, that’s it. And the finished product is both raw and burnt, the two manliest ways to eat meat. There’s nothing manly about a slow braise. I don’t care if it’s tripe, it’s still not as manly.

LAMAG: What do you hope to get for Father’s Day?

JS: Something where I can pretend I like it. Yes, I get excited about gadgets, especially kitchen gadgets, but acquiring things just isn’t that manly. And when we do acquire things, especially gadgets, we’re so particular about what we want that a gift is always a let down because it’s not exactly the one we wanted. Gifts, to be honest, are inherently girly.

LAMAG: What should I get my dad? He doesn’t cook, smoke cigars, and has enough Scotch?

JS: Does he throw parties? If so, maybe a shipment of barbecue from Coopers in Texas. Tickets to a game? I rarely make the effort to go to a game unless someone forces me. Books, even my book, is kind of lame. Maybe Coopers, the tickets and my book.