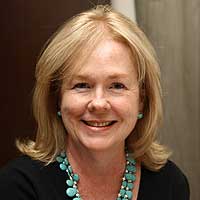 In two weeks, the nation’s top culinary talent will throw off their chef’s coats and strap on tuxedos for the 25th Annual James Beard Foundation Awards taking place on May 8 at New York’s Lincoln Center. We jumped at the chance to chat with Susan Ungaro, president of the Beard Foundation, to ask her point-blank about what always seems like a shortage of L.A. nominees, as well as the Foundation’s evolving mission in an era when every chef’s a TV star, and true fine dining is going the way of the aspic.

LAMAG: Can you tell us, what’s the mission of the James Beard Foundation?

LAMAG: Ok, so what does that mean from a practical standpoint?

We accomplish our mission in four ways, primarily. First, on over 220 days out of the year we have fundraising dinners here at the Beard House in the West Village featuring chefs from all over the country who come to showcase their great culinary work.

Second, we award what have become dubbed “the Oscars of the food world,” which happens every spring at the Lincoln Center: the James Beard Foundation chef awards. We also give out awards to books, broadcast media, and journalism. There are over 50 categories and we do it over two evenings.

Third, we have renewed our commitment to have a food conference annually, where we gather food leaders to discuss policy issues and trends. They took place in Washington D.C. two years ago, last year that happened in New York City at the Hearst Towers, and the conference will be returning on October 17 and 18 this year. As part of the food conference, the James Beard Foundation leadership awards are given out, which recognize a different group of leaders who are making this food world a better, healthier, more sustainable place.

Finally, the fourth way is through our James Beard scholarship program, which we’ve been giving out since 1991. Over 20 years we’ve awarded more than $4,000,000 in financial aid to about 1,400 culinary students.

LAMAG: How has the Beard Foundation had to evolve over the last several years?

When I first came to the James Beard Foundation I knew we need more people to know who James Beard was, why that matters, and why our awards matter. When people see those framed certificates in restaurants, if you don’t know who he was and what the Foundation is, they don’t mean anything.

I joined the foundation six years ago and it was just at the tipping point of the cult of the celebrity chef. Food network has now been on the air for more than 20 years. Food television used to be just PBS and the Food Network, but now it includes all kinds of genres on all networks. I think it’s a great thing for the public or anyone in the culinary industry in general. Today, young people, teenagers—my children—consider being knowledgeable about food and wine as a prestige. Our foundation celebrates that in the most visible way with the awards. But I don’t think you can watch any of the reality television shows these days without any number of Beard nominees and winners being included.  Our all-volunteer awards committee really makes sure awards keep up with trends, like the new bar service awards. We also made significant changes to the journalism and media awards. I know that our commitment to gather food leaders annually at the food conference is the hallmark of how we want to be perceived. We’ve live-streamed the conference and this year we’ll be live-streaming the awards. Not everybody can come, but everybody who’s interested, especially our nominees, can watch.

LAMAG: How does a chef get invited to cook at the Beard House?

We have a director of programming who works with a volunteer programming committee whose job it is to really keep on top of what’s happening around the country. They will make referrals of chefs that we should consider inviting. Also, we are very open to the growth of public relations and we are solicited frequently. The major gateway to come and cook at the Beard House, whether from Walla Walla, Washington to Baltimore, is that the chefs themselves and what they’re doing at their restaurant is getting good reviews and has something to say or add to the food atmosphere. But all we can offer is a modest food allowance. For chefs that come from California, Hawaii, Texas, or Chicago, that means they have to make their way here on their own. But we do whatever we can.

LAMAG: What is the actual Beard House?

Anyone can go on our website virtually and see what it looks like. It’s a Greenwich Village townhouse where James Beard lived for 15 years at end of his life. He taught cooking classes here and wrote several of his cookbooks. It’s a four-story townhouse with a small, modest kitchen where the chefs cook. We can accommodate up to 80 people for dinner including the Greenhouse and the main dining room. It’s a very atmospheric place. When you walk in the front door, you actually walk in through the kitchen to the cocktail hour that takes place in the greenhouse. My office is also here and some staff reside here.

LAMAG: We have to ask: Los Angeles always seems to be underrepresented in the Chef awards each year. Why is that? Is there indeed an anti-L.A. bias?

I certainly understand if people think there aren’t many nominees on the West Coast, but California and Hawaii have their very own category. Osteria Mozza has quite a few nominations this year, along with Nancy Silverton. Wolfgang Puck, who is getting the Lifetime Achievement Award this year, was actually the first chef to cook a dinner at the Beard House in 1987. The category of Outstanding Restaurateur has Caroline Styne as a nominee.

But it’s all about voting. Anyone who looks to our website—absolutely anybody—can vote. Anyone can nominate a chef for the first call for entries. We had 58,000 votes this fall. But then for the awards, all those numbers are tabulated independently, and nominees and winners are voted on by a jury of their peers, which includes journalists, past nominees, and past winners. We have looked to make sure that there’s national representation, which there is. Semifinalists and nominees in all the areas of the country get to vote.

But anybody who votes is asked to have experienced a particular restaurant’s atmosphere and food in order to vote for it. It might be that maybe fewer people are traveling all over the country to dine. I think it’s always a fair question, so anybody out there in California— especially chefs who have been nominees—should be out there voting!

The most important thing that I want to get across is that we keep wanting to improve and finesse our awards voting and governance. We went from all paper votes to online, but there’s always tweaking that needs to be done like making sure that our website is user-friendly and even app-friendly.

LAMAG: You did the Chefs & Champagne event here several years ago, but that was the last official Beard Event we’ve had in L.A. Will you ever be doing that again?

Honestly, attendance was not where we were hoping it would be when we did that event. The chefs were fabulous and we had great support from culinary community, but it was not the attendance we had hoped for. We do events out there, but they’re sporadic here and there like our Celebrity Chef Tour and Legends of Wine. It’s something we’re very cognizant of. I never say never, and I’m always open to exciting ideas.

LAMAG: Outside of the awards, I think Angelenos might feel a little alienated from the Beard Foundation in general. To many of us it seems like a New York thing.

We love L.A. and we want people to feel welcome. If there’s anybody out there who has some ideas or wants to do things with the James Beard Foundation, please come to our website!

LAMAG: What do you find an exciting trend in food right now?

There’s no doubt I find the move to casual-but-delicious dining heartwarming because I think, many years ago, the James Beard Foundation and the fine dining community was considered a little off-putting—a little too highfalutin. I think we are seeing the great chefs in America embracing the idea that you can dine out on great cuisine, but you can dress more casually and enjoy an atmosphere that is not all white shirt and white tablecloth. We’re seeing this in the nominees. That’s a major trend.

Interestingly, I think what’s also happening is the pastry profession is getting more noticed. Desserts are becoming more savory and varied. There’s a lot more creativity happening in terms of ingredients, and there are a lot more savory dishes that a pastry chefs are part of the creation of. On the flipside, we saw the trend to cupcakes go almost over the top. Now we’re seeing that it’s pies—pies are the new cupcake. I also like that chefs are putting unusual flavors into desserts. Lavender ice cream seemed creative a few years ago, now they are doing combinations of chocolate with chiles, cheesecake with foie gras. It’s exciting.

LAMAG: Did you ever get to meet James Beard?

I wish I had, but no, I never met him. I was the editor of Family Circle for many years and met Julia child. But James Beard I never met.

Thanks for taking the time. We’ll see you in May, Susan!