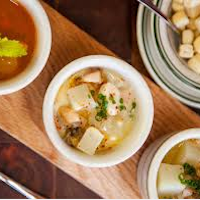 At some restaurants, you might order a flight of wine. At Connie and Ted’s the de rigueur dish is a chowder sampler.

Sure, you’ve had the creamy New England version, even if it’s sometimes so thick and gluey you could stand a spoon in it. You’ve probably also tried the red, tomato-laden Manhattan type that some aficionados assert isn’t actually chowder. But what about Rhode Island chowder? In Los Angeles, the clear, brothy varietal has been as rare as macaron-sized hail—until Connie and Ted’s.

At his breezy West Hollywood seafood bistro, Michael Cimarusti serves all three chowders, but it’s the pureness and clarity of the Rhode Island interpretation that stands out. While we were getting clammy at the city’s newest chowder houses, we took some time to chat about chowder with Cimarusit, the ultimate chowdahead.

What inspired you to offer three kinds of clam chowder?
Growing up we spent summers on Narragansett, Rhode Island. It’s made with clams, salt pork, potatoes, and clam broth. It’s very simple and very direct; it’s the most direct form of chowder. We also use the Rhode Island chowder as a base; we just add cream to it to make the New England chowder.

Your chowder is different, much more subtle and less gluey, than most.
We have people come in and tell us it’s too thin. Unfortunately some people have gotten used to flour-thickened chowders that are so thick you can stand a spoon up in them. That’s not the way chowder is supposed to be. I don’t think it’s traditional anyway. In our chowder there are no thickeners; the only starch comes from the potatoes.

Was chowder a staple food from your childhood?
I grew up in New Jersey. My Italian grandmother would make chowder all the time and she’d serve it with clam cakes. If you’re in a good place, you order clam cakes and dip them into the chowder. She made Manhattan-style chowder. It was delicious. I based the recipe at Connie and Ted’s on what I remember hers tasting like.

Tell me about your Manhattan chowder recipe.
We use salt pork, pancetta (not bacon because you don’t want a smoky bacon in a Manhattan chowder), garlic, a little bit of chili flake, San Marzano tomatoes crushed by hand, celery, carrot, onion, fingerling potatoes; we have clam broth and chopped clams then we finish it with celery leaves and olive oil. My grandmother would save the leaves when she chopped celery and at the last minute she’d throw a couple of the leaves on top. It was her final touch but also it was because she didn’t want to throw anything away.

When do you add the clams to the soup?
Clams are just wet little beasts so we don’t add them to the chowder until the soup is ready to be served. We make the chowder as a base and before service starts we reheat the clams in small batches. When we’re heating up a pot of soup, we add 20% of the weight of that soup in clams. So if there are 2,000 grams of soup then we add 400 grams of clams. The clams are completely raw right up until we add them to soup. Then you have to bring soup back up to simmer and make sure the clams are cooked. It only needs a minute or two.

Do you use different clams for the three chowders?
We use Middleneck clams for all three chowders. They’re native to New England. We get them from a guy in Gloucester. I think they’re more tender than Cherry Stone or Little Neck clams and they add tremendous flavor.

How much chowder do you go through in a typical day?
Gallons and gallons. I couldn’t be sure. We make the clear Rhode Island chowder and sell it as is and we also transform it into NE chowder by adding crème double: You take heavy cream and you reduce it down to half its volume. During that process the cream gets thicker, richer, and more flavorful.

What else is in the New England chowder?
Salt pork, potatoes, onions, clams, and clam broth.

What did you learn when you were developing your chowder recipe?
When I was creating the recipe, I researched chowder recipes that went all the way back to the 1600s. It started out as a fish-based chowder long before it was clam chowder. There was a hard, biscuit-like bread called ship’s tack or ship’s rations that was added to the chowder as a thickening agent.

Chowders would always have some sort of potatoes, some sort of pork, some sort of hard tack, and some sort of water. You’d put it over a fire and boil it. Everything pretty much evolved from those simple ingredients. Like so many historic recipes, it was born out of necessity. It wasn’t until the 1800s or 1850s that clam chowder became fashionable.

You also make your own oyster crackers.
It makes sense that oyster crackers are a traditional accompaniment to chowder. They’re dry and crunchy and hard, and that’s what I imagine ship’s rations were. They had to be dry because you were bringing them on a long journey at sea and you didn’t want them going bad.

What’s the biggest pitfall when it comes to preparing chowder?
I think the biggest pitfall is the temptation to add a whole bunch of stuff. The other issue is salinity. The main ingredient should be clams, but some clams are saltier than others. Be careful. Also, make sure that the potatoes are properly coked. If they’re undercooked the starch doesn’t come out and the soup isn’t as enjoyable as it could be. If you overcook them you have gruel. You have to try to get them so they’re just done all the way through. You have to hit that sweet spot.