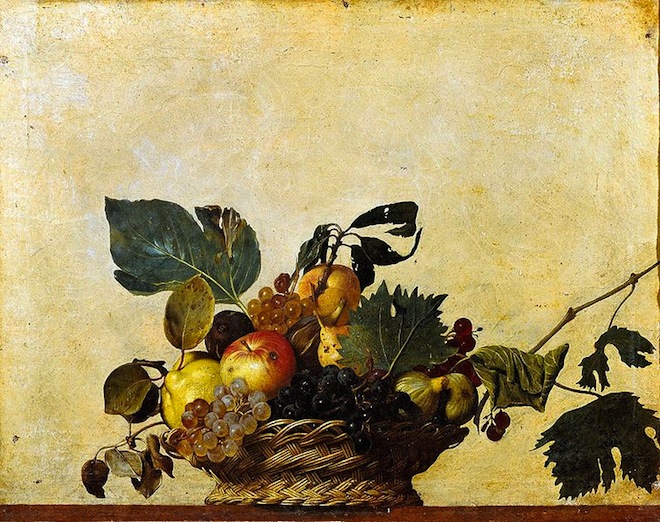 Since the story of Adam and Eve, fruit has served as both symbol and sustenance. This past weekend, Iranians all over L.A. celebrated Nowruz, or Persian New Year. Aside from the symbolic foods that are traditionally associated with the marking of Nowruz, the one thing that regularly graces a Persian table is a decorative bowl overflowing with ripe fruit.

Countless artists—among them Caravaggio, Picasso, and Cezanne—painted still lifes of fruit. Some are simple studies of color, others telling symbols that all beauty decays. But the modern day Persian fruit bowl has little to do with Western art’s representations. Instead, part of the meaning behind it comes from the symbolism attributed to each of the fruits in the bowl, especially the pomegranate, a fruit plentiful in the region around ancient Persia. Another, perhaps less obvious interpretation of the Persian fruit bowl is that at its core, it demonstrates the aspirations of its owner.

It’s worth mentioning, before going into any deeper discussion, that the Persian fruit bowl is no different from any other fruit bowl in that it contains fruit that is readily available, in season, and meant to be eaten. It’s not purely decorative, though it does also serve as decoration. In Iran, a fruit bowl may consist of (when available) pomegranates, dates, figs, oranges, fresh almonds, cucumbers (they are a fruit! and are always offered sliced and salted), quince or apples, grapes, cherries, peaches, and plums.

In general, fruit is an important element in the Iranian diet and miveh, or fruit, is the first thing you’ll be offered if you’re a guest. Backyards are planted full of fruiting trees and bushes and fruit is incorporated into breakfast, lunch, and dinner. Breakfast and dessert always involve fresh fruit, which, according to Najmieh Batmanglij in New Food of Life: Ancient Persian and Modern Iranian Cooking and Ceremonies, the hostess will often peel before presenting it to her guests.

Forough Hekmat, in The Art of Persian Cooking, writes that figs are used as offerings to God: “Once a year, when the figs are ripe, each child is weighed and the equivalent of his or her weight, in fresh red or white figs, is given to the poor. This is repeated each year until the child is about seven years old.” Halva, a candy made from ground sesame seeds, is mixed with dates and given to the poor when a relative dies. Ancient Iranian poets used fruit as symbols. Bos-hac of Shiraz, a poet active some 700 years ago, wrote, “…no one, so far, knows the inner secret of the watermelon. Each [fruit] has a sweet dream of his own!”

A fuchsia globe heavy with individual fruit pods faceted like precious stones, each with a pith-like seed in its center, the pomegranate has a pleasantly sweet and sour taste. Literature abounds with references to the fruit. Persephone, the Greek god who represents vegetation and springtime, was tricked into a partial life in the underworld after tasting a pomegranate. As a result of its internal structure, beauty, and prevalence in the Middle East, the fruit is commonly thought to represent immortality, fertility, and reproductive energy. But all types of fruit have been seen as symbols of fertility, and been used in fertility rites throughout history and around the world. The pomegranate’s place at the center of the Iranian tablescape has to do with both its ubiquity in the Middle East and the region’s religious beliefs.

Before Iranians adopted Islam as their national religion, Persians largely identified as Zoroastrians; the ancient religion is still followed by many today. Zoroastrian culture makes use of home remedies and utilizes the pomegranate tree in all its forms. The leaves are given to babies to chew on, the bark and sap is used medicinally, and the pods are placed in a dying person’s mouth. Many health benefits are attributed to the juice of the fruit, and it’s the main ingredient in fesengan, one of the oldest and the most famous of the many stews made in Persian homes.

In an Iranian home, care is taken when choosing a receptacle for the fruit; it’s not placed in a simple basket or plain bowl. It’s usually placed upon a pedestal which is practical, decorative, and demonstrative of the importance of the fruit as compared to the rest of what lies on the table.

Iranians will not describe this in so many words. Instead, when asked why they place their fruit in decorative bowls and not a simple basket, they respond simply, “it looks nicer.” But because there is even a Google shopping search term for “Persian fruit bowl,” it’s clear that the receptacle is just as important as what’s in it. Presenting guests with a beautifully laid out home, decorated to reflect the tastes of the woman of the house, and filled with precious metals and quality materials is important to Iranians. The culture is one where presentation is everything. Personal dress is discussed and dissected down to the appropriateness of an outfit for each specific occasion. Likewise, an Iranian always wants to present the best of her home to her guests, first as a sign of respect to the guest, but also, naturally, as a way to show her best to the world. The fruit bowl is but one small instance of this larger picture.

Fruit, a symbol of original sin, fertility, plenty, life, renewal, and health, is for Persians also a symbol of generosity, wealth, and well-being.

The core of every fruit is better than its rind:
consider the body to be the rind,
and its friend, the spirit, to be the core.

Editor’s Note: What I Saw at the Revolution