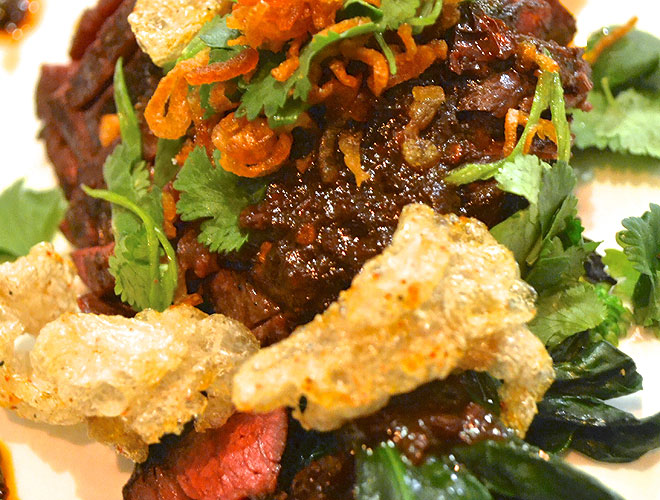 There’s usually a point during every meal at Sang Yoon’s Lukshon in Culver City when I wonder if I’ve somehow traveled to the distant future of Asian cuisine. CVap ovens, vacuum steamers, dehydrators, and all kinds of other whizzy gizmos play a role in creating all manner peculiarly appetizing tidbits such as lap cheong relish, chicory coffee barbecue sauce, and my favorite: puffed tendon.

Puffed tendon looks, feels, and tastes a lot like your standard chicharrón, but it’s actually light years from typical fried pig skin. Tendon from a cow’s shin is pressure cooked, dehydrated, and fried before being seasoned with Sichuan-pepper salt. The result is something more subtle and exquisite than your average pork rind—lighter and less oily. The meticulous preparation is all so that Lukshon’s spruced up rendition of beef and broccoli can be garnished with something fun and crunchy and, well, beefy. For chef Sang Yoon, that means cow tendon turned into cow puffy puffs.

At Lukshon, I have seen the future of Asian cuisine, and it’s delicious. Best of all, there’s not a nugget of orange chicken in sight.

Culver City Has a New Pizza Spot in an Unexpected Place