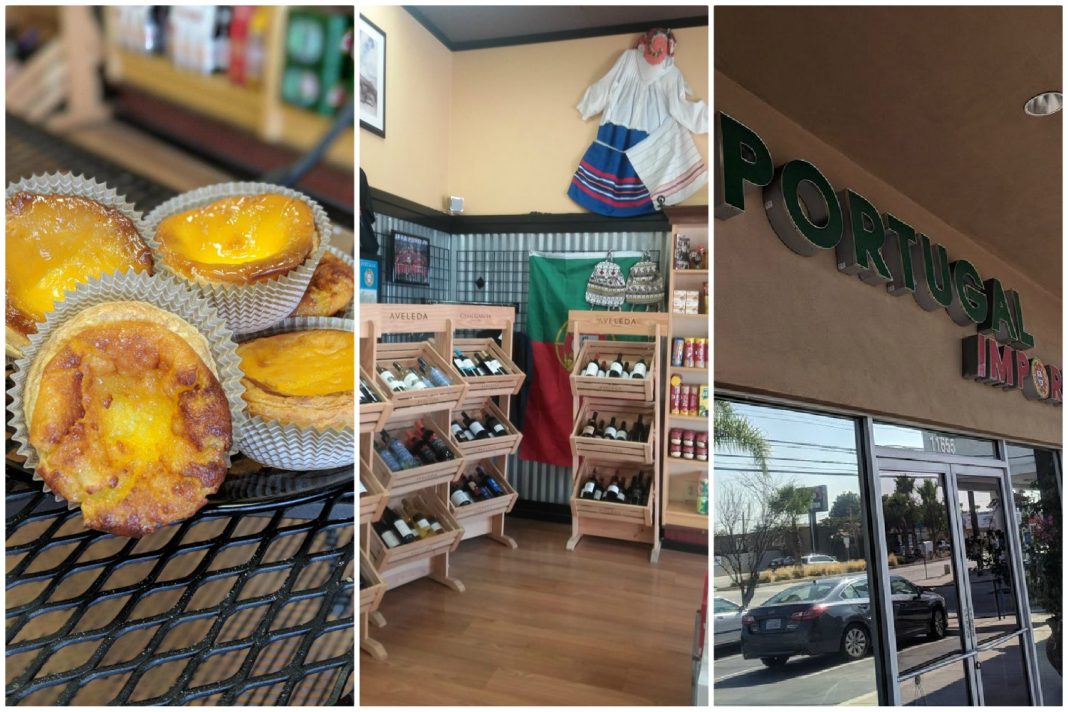 I ask for two glasses of water, and Marco Costa squeezes out my order from a multi-gallon plastic jug of Arrowhead (the big one that comes fully equipped with a tap dispenser). He’s crushing the sides of the synthetic vessel because Marco, I imagine, has shit to do.

He and his wife have owned Portugal Imports for the last 13 years, supplying and stocking tricky-to-acquire specialty items like bacalhau (salt cod), jamón ibérico, Portuguese olive oil, and Milhafre cheese from the Azores. They’re also making from scratch queijada de nata and queijada de belem, flaky, custardy egg tarts that are ubiquitous in Lisbon. The water at Portugal Imports, extracted from the artificial Arrowhead jug with brute force, also serves as a capable reminder: Finding a full-service Portuguese restaurant anywhere in Los Angeles is pretty much impossible. You’ll find Brazilian steak houses and a couple of places serving the aforementioned tarts, but nothing that approximates a sit-down Portuguese restaurant.

I ask Costa why that it is. “It would take the right person to do it,” he says. Again, I pry, “Why don’t you do it?” Costa shoots me a look like, “Dude, have you ever even tried to open a restaurant?” The deli-style setup, complete with a bakery case full of purses for sale, is working for him.

Portugal Imports is a product of Artesia’s long connection with the country. California has had a robust Portuguese population dating back to the early 19th century, when Portuguese expats dominated the now-extinct whaling industry in San Diego. Eventually, around the turn of the 20th century, Portuguese dairy farmers settled in Artesia (about 20 miles southeast of Los Angeles proper). Dairy farming proved to be much more lucrative for the Portuguese, and a community developed.

Since then the 1.6-square-mile city of Artesia has been a small but sufficient home. Basically, the Portuguese population there lives on three main streets: Arline, Clarkdale, and Seine avenues. Those rows and rows of houses around the Artesia D.E.S Portuguese Club feel like a neighborhood unto themselves.

Costa’s family hails from the Azores, just off the coast of the Iberian Peninsula. Azoreans weren’t granted immigration until 1958, when, due to an increase in volcanic activity, Congress passed the Azorean Refugee Act, allowing many Azoreans to immigrate to the U.S. while authorizing non-quota visas. This legislation, spearheaded by then-Sen. John F. Kennedy, allowed families like Costa’s to not only seek much needed shelter but also security. “The Portuguese population is probably 3,000 now compared to 10,000 20 years ago,” Costa tells me. “Many second-generation Portuguese have moved out of the area, and there has been little to no immigration the last 20 years.” It’s likely that number will continue to dwindle, making Portugal Imports an even more crucial part of retaining Portuguese culinary traditions in Artesia.

Sit down at one of the two tables at Portugal Imports, and directly behind you, you’ll notice cases full of unctuous canned sardines. Swivel around and the whole wall is filled with lupini beans, hot chopped peppers from the Azores, peppery olive oils—flavors and ingredients to take home and use in your own cooking. At the front counter, the shop’s exceptional queijada de belem and queijada de nata are on offer, made with simplicity and care. In the refrigerated section, you can snag a container of the bacalhau a gomes de sa, a casserole of cod, potatoes, onions, and olives. Costa will gladly heat it and serve it along with a plastic fork. Portugal Imports isn’t the sit-down restaurant some people might be looking for, but it’s exactly what it should be: a celebration of Portuguese flavors set in a community once steeped in them.

RELATED: Where to Get Food from the 24 Women’s World Cup Nations Right Here in L.A.