Home Uncategorized Playing With Fire: Your Ultimate Guide to Grilling 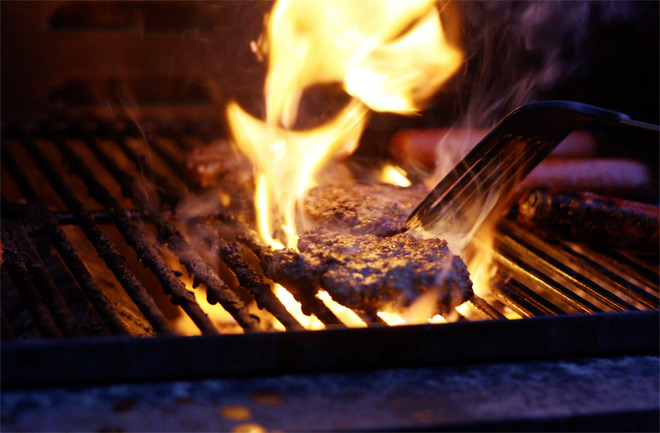 We hate to break it to you, but that thing you do in your backyard with a few burgers and brewskies on the weekend? That’s not barbecuing—that’s grilling. Barbecue is about heavy sauces and eight hours of low and slow smoking. Grilling is all about high heat, quick results, and clean flavors. Fast and fresh, it’s the California way. But there’s an art to searing meat over a flame, just as there are pitfalls to the summer’s official cuisine—from charred (but raw) steaks to fish stuck to the grate like cement. Some local charcoal commandos share their know-how. Fire in the hole!

Try Wood
“People always ask what marinade we use at M.B. Post,” says David LeFevre. “But it’s just the taste of wood.” At home it’s unlikely you’ll have room to go 100 percent timber. LeFevre recommends starting with a base of charcoal and throwing on a couple of small logs. With gas, soaked wood chips are best. For the most flavor, use mesquite, oak, or hickory; California Charcoal & Firewood (1518 Eastern Ave., Commerce, 323-780-6000) sells 40- to 50-pound bags for about $12.

Prep Your Grate
“One of the biggest mistakes I see is people not getting their grill hot enough,” says Chris Phelps of West Hollywood’s Salt’s Cure. “The grates should be almost white, they’re so hot.” The heat will cook off any gunk (a quick brushing helps, too) as well as allow for a quick outer sear on whatever you’re grilling. But “don’t wash them!” warns fellow Salt’s Cure chef Zak Walters. “You want your grill well seasoned.” To avoid sticking, oil a clean rag and give the grate a quick rub.

Be Patient
“Let the wood and coals die down to orange embers,” says LeFevre. “That can take 40 minutes.” Also, “the early black smoke is bitter,” says Anthony Zappola of the Royce Wood-Fired Steakhouse. “If you wait, the smoke will turn white. That’s the good stuff.”

Use the Right Cuts
Big and fatty may not be how you would like to be described, but for your grill protein, it’s the ideal. “The bigger the cut of meat, the more forgiving it is,” says Zappola. “Instead of getting four six-ounce sirloins, get one that’s a pound and a half and carve it for six people. The bigger steak can sit on the grill longer, which imparts even more flavor. Plus it looks impressive.” A bone-in cut can also handle a longer cooking time and derive the same benefits. Save leaner tenderloins and fillets for the oven. “The fat is what picks up the grill flavor,” says Walters. Opt for richer choices like New York steaks, rib eyes, and shoulder cuts. Or expand your repertoire by braising tougher, muscular meats first—brisket, short ribs, pork belly—then finishing them on the grill

Season Smartly
Do not, we repeat, do not put sweet sauces on your meat before grilling. “All of those sugars are just going to burn,” says Walters. Instead many chefs recommend just salting the meat before cooking and adding any flavorings after the fact. (Hint: Pepper your meat at the end—the delicate corns can char.) If you do wish to marinate your meat, LeFevre suggests a simple wet salt brine. The Salt’s Cure marinade? Fresh herbs blended with oil. Dry spices, such as cumin, toast nicely on the grill; LeFevre advocates sprinkling them liberally on steaks and fish.

Start Off Dry
“Water is the first reason your fish or meat is going to stick,” says LeFevre. To combat adhesion, use paper towels to thoroughly dry anything that’s going on the grill. For delicate seafood and even steaks, he advises brushing on a light coating of oil. “Dry, then season, then oil—that’s the trick.”

Keep Moving
“Your grill needs microclimates,” says Chad Colby of Mozza’s Chi Spacca. He recommends keeping the heat on the left cranked all the way up, the midsection kept at medium, and the right side shut off. Begin grilling in the highest zone to sear, then move the flesh to lower heat so it will cook through. “But pay attention,” he says. “It’s like having your back to the ocean.”

Trust Your Senses
“It’s all about kitchen awareness,” says Colby. “I catch a lot by reacting to things as they change. You need to listen for the sizzle: That’s the sound of fat rendering, which is generally what you want. If you stop hearing the sizzle, find out why. The meat probably needs to be flipped, or the fire needs to be adjusted. And if you smell something you didn’t smell before, chances are something’s wrong.”

Watch Your Flame
Pyrotechnics are awesome, but not when it comes to food. Too much direct flame results in nothing but burned meat, and a roaring gas fire lends a chemical taste. Identify your grill’s coolest spot as a “rescue zone,” where you can quickly move your meat in the event of a four-alarm flare-up. “You can even use the resting rack where you warm buns,” says Zappola.