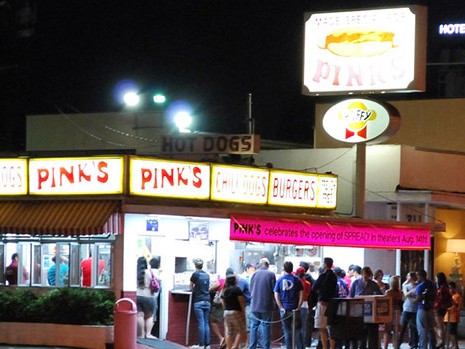 La Brea’s iconic hot dog stand, famous for its snaking line and celebrity patrons, is turning 75 this year. To celebrate, head on up to Hollywood and snag one of their famous chili dogs for just 75 cents. For seven nights—between Nov. 7 and Nov. 13—the 75-cent chili dogs will be available for 75 minutes starting at 7 p.m. Orders are limited to seven dogs per customer. Sensing a theme?

Pink’s classic chili dog comes with an all-beef dog topped with chili, mustard and onions. For the promotion, the restaurant will be donating 100% of the night’s sales to a different charity each day.

The three-quarter-century history of Pink’s is well documented, beginning with Paul and Betty Pink opening an hot dog cart in Hollywood in 1939, then moving into small building near the corner of Melrose and La Brea in 1946. Over the next few decades, Pink’s became famous for being frequented by some of the biggest stars in Hollywood such as Jay Leno, Tom Hanks, and Rosie O’Donnell (the later of which has a special dog named after her).

The only thing perhaps more well-known about Pink’s than it’s celebrity clientele is its long (but efficient) lines. And we’d expect them to grow just a little bit longer once fans hear about the discount chili dogs.