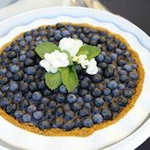 “Pie and bread,” said Karen Hatfield, plastic fork in one hand, legal pad and pen in the other, “are the most difficult things to do well in pastry.” Pastry chef and co-owner of Hatfield’s and Sycamore Kitchen, Hatfield was one of twenty-six judges at the Fifth Annual KCRW Pie Contest, held this past Saturday at the Los Angeles County Museum of Art.

While nearly 1,000 attendees bopped to Anne Litt’s beats on the museum’s lawn, we snuck in the back to watch judges crowd around long tables piled high with pie. Under the sticky shade of nearby loading docks, they tasted pies in six different categories. Pastry chef, author, instructor, and judge Robert Wemischner looked wide-eyed at all of the pie and mused at how “this thing just keeps getting bigger and bigger.”

Good Food host Evan Kleiman again presided over the contest, but didn’t do any judging (“I’m just a pie pusher; I don’t partake”). Despite the heat—producer Gillian Ferguson says she received several calls from entrants who begged off, claiming that “it was too hot to turn on their oven”—a record 258 pies were entered. Among more than a dozen apple, classic pecan, and blueberry varieties was an avocado pie, a pink pie flavored with bubblegum, cheesecake-style pies, a blueberry kuchen pie, a cannoli-inspired pie, and a fresh vegan nectarine pie—which Kleiman herself pronounced “delicious.”

Moby helped judge the vegan category, but said that his favorite pie—a lemon custard—was voted out by his team members who said it was more like a cake than a true pie. “Imagine if the Grammy’s were chosen this way,” joked Kleiman who oversaw the show of hands. On being a judge Moby told us, “I wish I had some sort of inventive or insightful method for this, but I just really want it to taste good and not put me into a diabetic coma.”

Chef Susan Feniger (Border Grill, STREET) was one of the judges who tackled the savory pie category. “I’m looking for balance between the filling and the crust,” she said, while frowning over a meat pie. “You know just by looking what’s going to taste right and what’s not,” noted Karen Hatfield.

Valerie Gordon, of the newly opened Valerie Echo Park, said that she looks for “a balance of flavor, ingredients that are cooked properly, and a well-baked crust.” Chef Akasha Richmond (Akasha) added that she prefers simpler pies: “It’s more about texture and flavor than too many bells and whistles. There needs to be something that gives it depth so that it doesn’t taste like a recipe out of a magazine.”

Over on the sweet side, our own Elina Shatkin tasted all 58 specimens in the cream pie category. She took her judging duties seriously, starting the day with 90 minutes of cardio and a kale salad. “You can generally handle the first dozen pies, but then the richness gets you. You hit a wall, a very creamy wall.” Though Shatkin says she’s “agnostic when it comes to pie” and just wants it to “taste good,” she did point out that “bubble gum should not go into a pie—unless you’re trying to make a pie that tastes like Pepto Bismol.” Shatkin also took issue with the pie that featured the unofficial state fruit of California. “Avocado… just… No. Don’t do that. It’s just wrong.”

Unsurprisingly, fruit was the biggest category at the contest. Cook’s County’s pastry chef and co-owner Roxana Jullapat took charge at the fruit pie judging table, pinching a crust here, testing the texture of a peach there. She said it was “the best year yet. People really followed our advice from last year. Many more entries have properly baked crusts, crusts with great color. There’s also a lot of seasonal fruit here, which is good.” Zoe Nathan (Huckleberry, Milo & Olive) added that she was happy to taste “salt. Overall, fewer bakers forgot the salt—in the crust and the filling.”

Jullapat says she generally judges a fruit pie by the quality and flavor of the fruit and by the depth of flavor overall: “No one wants to taste a flat pie, or artificial anything.” Valerie Gordon added: “You also don’t want it to be too sweet or cloying. People need to understand that in baking, every flavor is concentrated. But if you pick the wrong fruit, or a fruit that’s not in season, you’ll have a flaccid tasting pie.”

Chefs David LeFevre (Fishing With Dynamite, M.B. Post) and Kris Morningstar (Ray’s and Stark Bar) headed up the nut pie category. LeFevre says he was looking for a flavorful filling but mainly a “perfect crust. Flaky, chewy, crisp, and crunchy at the same time. It’s all about the crust.” On crust, Short Cake pastry chef Hourie Sahakian had this to say to future entrants: “whatever you do, get good color on your crust, use great ingredients, and don’t forget the salt.”

And now, the winners: