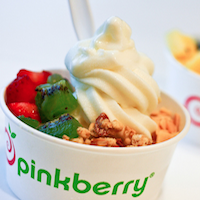 He is a former kick-boxer and architect who helped found a chain that serves these frozen yogurt-like treats: Pinkberry has become popular around the world for its simple formula, sweet and sour taste, and refreshing toppings.

In the summer of 2011, Lee assaulted a homeless man near a highway off-ramp in Hollywood. When he was charged in 2012, Lee told authorities that the homeless man had flashed an offensive tattoo. The tattoo was of a stick figure couple having sex.

After beating him with his fists, Lee left the scene only to return with one of these: This is a tire iron. It is used to remove a tire from its axel.

On Friday, March 14, Young Lee was charged in Los Angeles County Court and found guilty of assault with a deadly weapon. He was sentenced to seven years in: