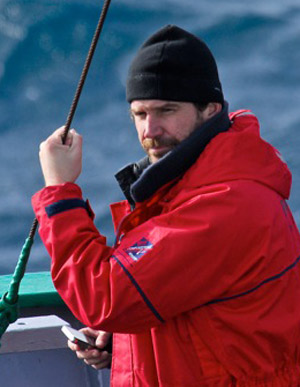 To enter Philippe’s at lunchtime is to witness one of L.A.’s great scenes. Stretching from the counter to the door are ten lines, often 12 people deep. A giant menu spans the side wall, but the type is too small to be read by anybody except those in the nearest queue. It hardly matters. Everyone knows what they’ve come to eat: the French dip sandwich, a pile of just-carved meat on a soft French roll that has been soaked briefly in the meat’s juices. For this we will wait. Fifteen minutes is average, but rather than aggravating us, waiting is part of the ritual, the amuse-bouche.

Occupying the width of the room, the counter has the heft of a massive buffet. An efficient crew of Latinas with pinned-back hair coax and direct customers through a selection of dishes, many of which come from a different time: pig’s knuckles, pickled eggs, cinnamon-dusted tapioca. Ranks of lemonade-filled tumblers spread across a back counter. The crew stack the meats, dip the bread, take the money (cash, thank you), and send customers forth to find a spot in the warren of dining rooms.

Catercorner from Union Station and abutting Olvera Street on one of Chinatown’s lower slopes, Philippe’s appears to be hewn from the very rock on which L.A. is built. A bric-a-brac of faded tourism posters, dusty antlers, and warehouse scales—the restaurant is celebrating its hundredth year and has the souvenirs to show for it—covers the walls in the downstairs rooms, where customers sit shoulder to shoulder at the long red tables. The sawdust shavings speak of an era of saloons, the train memorabilia nod to the age of regal railway travel, and the row of phone booths by the door clench like a villain’s grin and spit out the word noir.

Los Angeles is an unlikely place to give rise to the French dip. The chili burger, the avocado BLT, the family-size burrito—all reflect different aspects of the city, whether it’s Midwestern nostalgia, tropical bounty, or second-generation abundance. The French dip is more invented than home grown, and debate over its origins has resulted in one of L.A.’s more storied rivalries. By some accounts, it was concocted at Cole’s Pacific Electric Buff et on 6th Street (which opens again this month after being reenvisioned by nightclub entrepreneur Cedd Moses and chef Neal Fraser). But Philippe’s has steadfastly maintained its parentage of the French dip from the get-go.

In Philippe’s version of events, the genesis of the sandwich can be traced to the restaurant’s founder. Philippe Mathieu, a native of a town in the south of France, opened the establishment in 1908 a few blocks south of the current location. It was a delicatessen set amid the train tracks and the vineyards that dotted the area. The moment that would lead to the restaurant’s fame arrived in 1918, when Mathieu dipped a roll in the juices that had gathered at the bottom of a pan in which a roasted loin of beef had rested.

The date may be fixed in eternity, but the use of the word French is a little vaguer. According to the Martin family, which has owned Philippe’s (nobody calls it by its proper name, Philippe the Original) since 1927, the word derives from the roll the sandwich was served on, the name of a police officer who was the first to try it, or Monsieur Mathieu’s nationality. That ambiguity helped lessen any frenchified airs that might have put off the postal workers and firemen who have dined in these halls, making the joint their own by calling it Felipe’s. For me, though, the Gallic qualities are undeniable. It is hard to imagine a frugal bonhomme not finding use for a pan of cooking juices. In the French dip’s moistness there’s the trace of a pan-bagnat, that specialty of Provence (Mathieu once worked in Aix) in which olive oil and tomatoes provide the tender first layer of a traditional sandwich.

That moisture transforms what is a pugnaciously simple sandwich (pork and lamb are offered, but beef is the most popular) into a classic. The deftness with which the counter ladies dunk the roll is imbued with affection. Although the restaurant serves thousands of people daily, each sandwich seems to be an individual creation. The ladies hand us our trays with a smile that says, “The sandwich was already great, but for you I added a little au jus, too.” You can ask for yours to be double dipped—where both halves of the roll are swiped through the juice—but I like to go with the standard single dipping (less risk of the bread becoming sodden) and to top it off with cheese. A hot pork sandwich with blue cheese early in the morning puts a different cast on the day than a bowl of kasha, especially when the whole thing is ignited by a dose of the horseradishy house mustard.

This isn’t your typical deli sandwich. The loose construction recalls Peking duck arranged in a thin pancake—a study in minimalism. But good as it is, not everyone comes for the French dip. Pancakes, too, are masterfully done, with a little caramelizing from the griddle. The early hours are in fact a period of relative calm, when Chinese men from the neighborhood congregate at the tables, nursing cups of the 9¢ coffee and passing around sections of newspaper. During the postlunch quiet (calling it a lull would be an exaggeration), office workers linger over slices of buttery apple pie. Shifts change, paychecks are distributed, a team of holstered detectives get in line. A young man taps away on a laptop, and a scene that would be almost clichéd in a Starbucks seems original here.

We all have claims to Philippe’s. Whenever we call it Felipe’s, giving it an English speaker’s Spanish pronunciation of a French name, we are drawing the institution into the linguistic fluidity that makes up the L.A. vernacular. The restaurant’s history isn’t what attracts us; the continuity is. Philippe’s is that rare marker with which we can measure time. To pause in the upstairs rooms is to understand what a hundred years in L.A. means.

Across the street at Union Station, the Texas Eagle idles on track 10. Passengers stare out the windows, and the conductor with a handlebar mustache looks down the tracks like someone gazing at the horizon. Sitting at Philippe’s, you’re eating with Angelenos from other decades—the porters and the masons, the shopgirls with dreams who took the streetcar from Bullock’s. Like them, you have felt the need to get back to what has lasted in this city, and like them, you strengthen the bond between Philippe’s and Los Angeles when you enter its crowded halls and take your place in line.