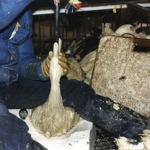 As you’ll undoubtedly recall, California chefs got up in arms when a law went into effect this July that banned the sale of foie gras, duck or goose liver that’s been fattened, usually via cramming a metal tube down the bird’s throat and force-feeding them corn mash in quantities that can add up to 10 times what they’d normally eat.

The statute forbidding the sale of foie gras was passed in 2004, but left a strange loophole: it can’t be sold, but can it be given away? This legal grey area has caught the eye of several restaurants, including Hot’s Kitchen in Hermosa Beach, which serves its eight-dollar “THE” burger with a “complimentary” side of foie gras. And PETA is calling BS.

Per PETA’s blog: “We contacted the Hermosa Beach Police Department, but with a lot on their plates, they haven’t gotten around to the case. So we’ve taken the matter to court, filing suit against the restaurant, called Hot’s Kitchen, for engaging in unlawful business practices.”

Hot’s Kitchen chef Sean Chaney—who was one of the parties involved with seeking an injunction from the state, claiming the ban was unconstitutional and vague—spoke to NBC, replying simply with, “Foie gras can be made humanely, and we continue to provide our customers with wholesome and humane animal products.”

It doesn’t look like the state would agree with Chaney’s assessment. When Papa Schwarzenegger originally signed the bill, he gave this statement: “This bill provides seven and a half years for agricultural husbandry practices to evolve and perfect a humane way for a duck to consume grain to increase the size of its liver through natural processes. If agricultural producers are successful in this endeavor, the ban on foie gras sales and production in California will not occur.”

The fine for violating the law is a $1,000-per-plate fine, but as PETA notes in the blog, police departments aren’t exactly chomping at the bit to enforce it. Not surprising, given that the LAPD was rather open about their laissez-faire attitude toward the ban. Officer Karen Rayner, a spokeswoman for the Los Angeles Police Department, told Bloomberg back in June: “[Producing or selling foie gras in California] is not a crime that would be investigated by the LAPD or likely any other municipal police department.”

While a similar ban in Chicago was overturned after two years (with then-Mayor Richard M. Daley calling it the “silliest” ordinance the city council ever passed), there are still around 15 countries that ban its production and sale outright, including Germany, Italy, England, Poland, and Finland. It will be interesting to see how this one unfolds.

[UPDATE: Grub Street LA reports that PETA will also be staging a protest outside of Hot’s Kitchen today.]