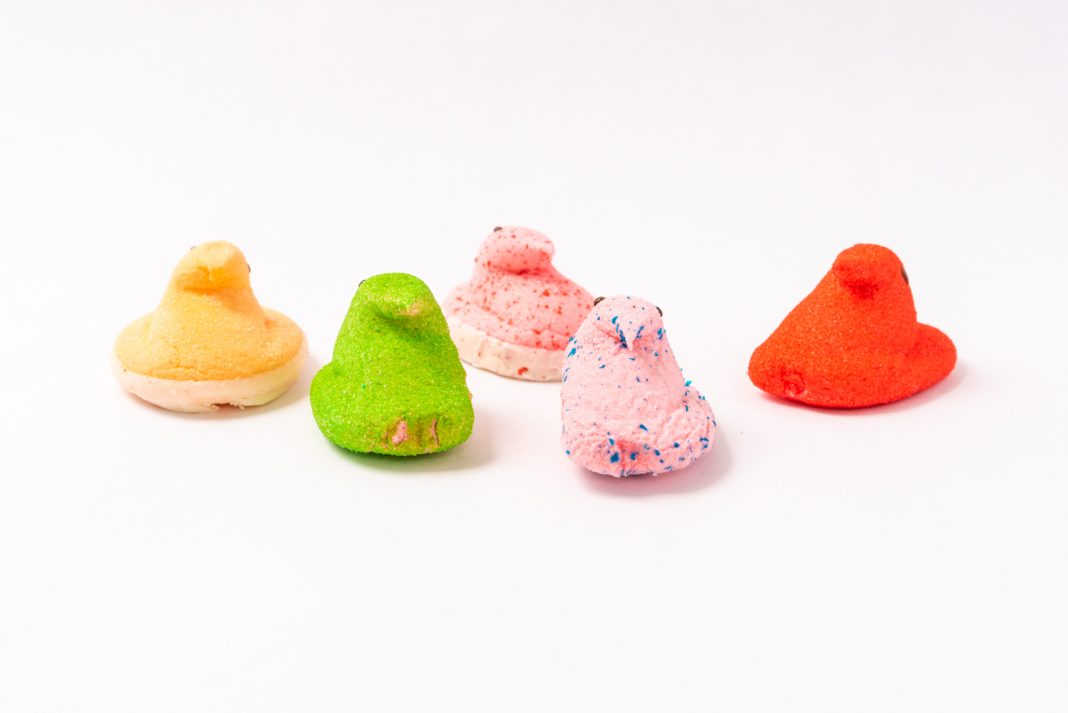 Easter is right around the corner (just ask Kanye West), which means we’re in the thick of Peeps Season. Once a fairly basic basket-stuffer, recently there’s been a rapid expansion in Peeps flavor options. We gathered our team for a taste test of some of this year’s strange, unnatural–and, in some cases, even surprisingly good–varietals, and ranked them from tastiest to trash.

The overall winner in our taste test was this orange dreamsicle-like Peep. The heavenly orange flavor worked perfectly with the marshmallow flavor and texture, and the dip of “creme” at the bottom. The only person who didn’t like this one was the person who stanned for the fruit punch, which we’ll return to (much) later. The pastel orange color was also deemed to be “extremely Instagram trendy,” which is the highest compliment anything can receive.

“Strawberry shortcake in a really great way,” raved one taster. The flavor and texture of the strawberry marshmallow and vanilla dip were well-received. The only complaint: Red speckles on the pink Peep flesh made several tasters think of gruesome blood spatters.

The panel was divided along a clear line: Those who had fond memories of eating watermelon Airheads as a kid loved this one, those who did not passed. While it came in with a pretty high ranking, the extra stretchy, soft texture and hot pink interior didn’t do it any favors.

While it performed well in our ranking, no taster was able to accurately pin down what the flavor was that Peeps was going for here; guesses included “marshmallow” and “some kind of cake, but better than the other cake one.” The texture, speckles, and dip all worked.

The Cotton Candy Peep nails marshmallow and cotton candy in a way that was overall pretty pleasing. Reviewers especially appreciated the blue speckles, which add a little bit of crunch and texture variation.

“Smells like a cheap candle,” said one taster, met with a wave of agreement from the panel. But some people like cheap candles; one reviewer marked Party Care as her favorite in the entire tasting, citing a “toasted marshmallow” flavor.

The color says “Hot Cheeto,” but the overpoweringly intense scent says “elementary school juice box” as soon as the package opens. Tasters mentioned notes of Swedish Fish, but disliked the “tart aftertaste.” For others, it was harder to put a finger on why the experience was so unpleasant. “It just really wigs me out, I can’t explain it,” said one.

We had high hopes for this one, given how well the other options in the Peeps Delights line fared, but this filled offering was a failure with our panel, several of whom bit into the peep not expecting a caramel-like ooze to come out. “This is like a Three Musketeers bar, but horrible,” one reviewer said. “The caramel stuff seems like it’s made of plastic,” noted another. (Note: We failed to get a good photo of the Chocolate Caramel Swirl Peeps because they literally melted on our art director’s desk upon being removed from the package. Oops.)

“It sort of smells like a McGriddle, but…bad,” a taster noted. That it was a chemical approximation of the pancake and maple syrup flavor came through to the panel without prompting, but that didn’t make them like it more. “I associate this smell and flavor with a different texture, pancake texture, and getting the marshmallow mush is making my brain go crazy.”

The visual appearance of the Root Beer Float Peep is remarkably similar to the poop emoji, but that’s not why it was our bottom-ranked flavor in the test. “I thought this was going to be, like, cinnamon bun flavor,” said one taster, after looking at the sample. “I’m really, really disappointed.” The best anyone could say about it was that it had a “licorice-like” flavor, but the person who said that hates licorice.

RELATED: We Ranked the Top 14 Brands of Greek Yogurt, Just Because