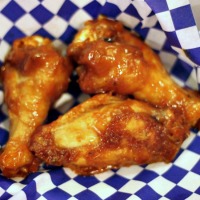 Chicken wing flavors are a bit like Pokémon—just when you think you’ve seen them all, one jumps out of the bushes and catches you completely off guard.

That was my experience during a visit to Buff Wings, a recently opened chicken wing specialist tucked inside a Glendale strip mall, where owner and chef Ian Angeles serves around 20 flavors, including offbeat combinations like pizza wings, elote “street corn” wings, and peanut butter and jelly wings.

That’s right, peanut butter and jelly wings. As it turns out, they’re delicious.

Angeles, whose parents run the popular Eagle Rock Filipino restaurant Fiesta Sa Barrio, got into the chicken wing game a few years ago, when his family moved their restaurant to a larger space and asked him to do something with the existing storefront until the lease was up.

“The wing thing started as something to fill my time when I was in between jobs, but then I realized I actually really enjoyed it,” says Angeles. He soon became a local chicken wing prodigy, gaining notoriety for his plump, deep-fried wings and the inventive, flavorful sauces he makes from scratch.

Once the lease on the Eagle Rock location of Buff Wings was up, Angeles scouted for a new space until he found one in the heart of a crowded Glendale strip mall. On the menu at his tiny shop you’ll find the requisite buffalo wings, of course, offered in five spice levels (be warned: “Ridiculous” tosses in diced habanero peppers, while “Ludicrous” adds in ghost chile extract).

As for the creative “specialty” flavors: Pizza wings arrive come smothered with marinara sauce and a showering of melted Parmesan and mozzarella cheese. Elote wings, inspired by a late-night visit to a Downtown street vendor, are tossed with mayo, butter, cotija cheese, lime and chile powder. You’ll also find speciality flavors like Thai BBQ, Adobo, Spicy Mayo, Orange Chicken, Jamaican Jerk, and Korean Galbi, which is marinated and then charred on the grill.

But the winner of our visit was undoubtedly the Peanut Butter and Jelly wings, which combine peanut butter, grape jelly, Sriracha, vinegar, and soy sauce to produce a thick glaze that tastes like a fruity, amped-up version of what’s usually served with satay skewers.

In the near future, Angeles says he plans on adding more special flavors. We’re looking forward to whatever this wing nut is dreaming up next.