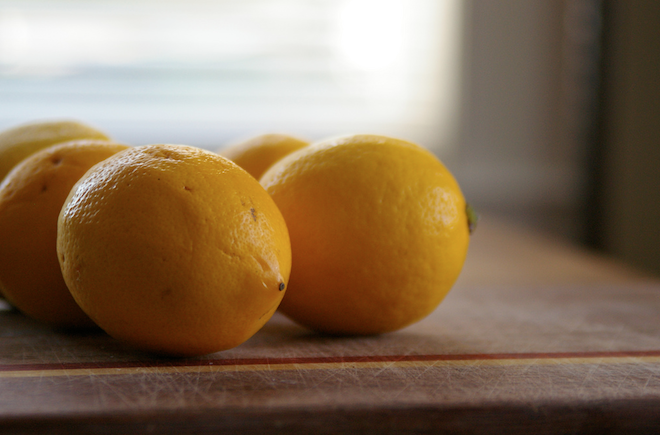 In 2005, when Martha Stewart was released from prison, one of the first questions reporters asked her was what she missed while she was locked away. She replied without hesitation, “I really missed lemons…” When asked what else she missed, she said, “Uh, I only missed lemons.” And then, a moment later, “and my family and my friends.”

Lemons, for domestic guru Martha Stewart, are more beloved than one’s own family and friends. As the holiday season approaches, whether or note you hold lemons in higher regard than your kin, note that Meyer lemons are for sale right now at farmers’ markets from Pasadena to Santa Monica. Windrose Farms has some small, globe-like Meyers; Garcia Family Farms has tangerine tinted Meyers with a supple skin. Considered by some to be the ne plus ultra of lemons for their slightly floral flavor and fragrant oil, Meyer lemon juice and zest may be used whenever regular lemons are called upon. Consider: Roasted chicken with garlic and Meyer lemons; Salmon with dill and Meyer lemon zest; Lemon bars—with Meyer lemons.

Actually a cross between an orange and a lemon, the Meyer is a relatively new import from China circa 1908. It’s never surpassed the popularity of its purebred cousin, but it will forever be cherished by avid cooks (and former convict Martha Stewart).

More in Peak Season at LAMag.com