Home Dining Chefs and Restaurateurs A 19th Century Gadget Is Turning Out One of L.A.’s Most Exciting... 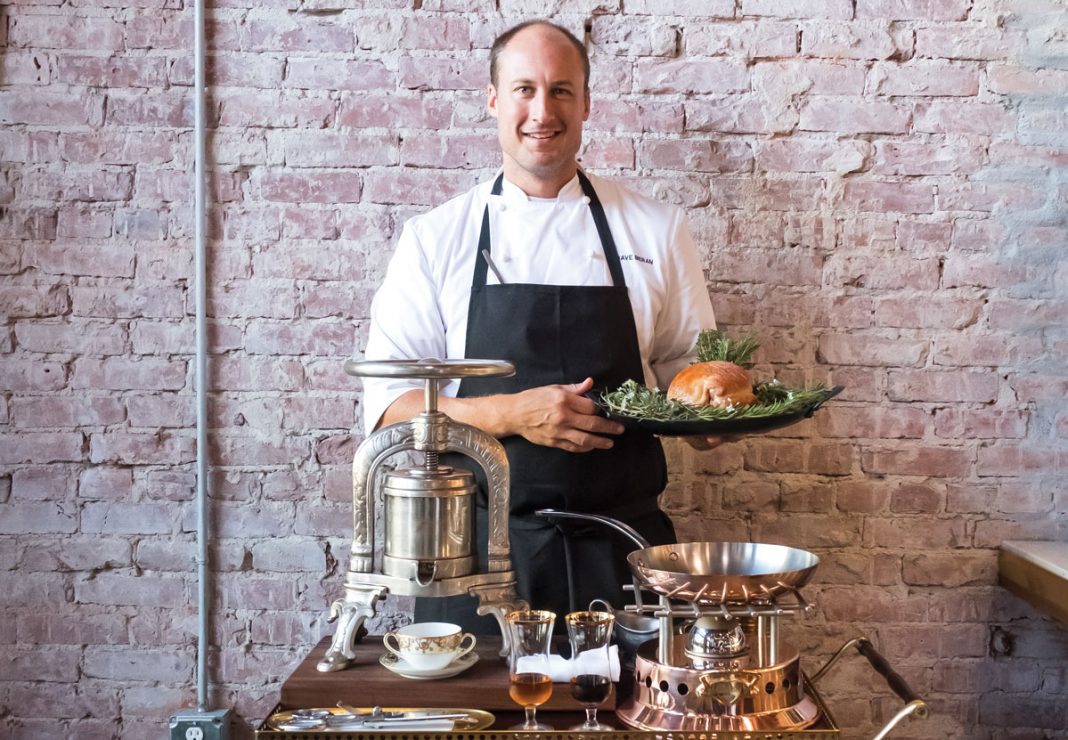 Dave Beran recently scored big on eBay. The 38-year-old chef acquired an antique duck press from a man in Ohio for less than $3,000. It’s nearly identical to one he already owns, but Beran is that rare chef in need of not one but two of the 19th century cooking instruments, which are used to crush a duck carcass to yield a sauce.

“You have to have the press to get the juice out of the bones,” explains Beran, who cut his teeth at Chicago’s famed Next. “There isn’t a way around it.”

When he first opened Pasjoli in Santa Monica in late September, Beran struggled to keep up with the demand for duck, hence the second press. (He also hopes to eventually add a pressed lobster to the menu.) The new restaurant’s canard à la rouennaise à la presse ($150 for two people) is a whole bird prepared in the manner of turn-of-the-century French legend Auguste Escoffier. It’s roasted, and at tables that order the dish, a cart bearing a press is theatrically wheeled out. The legs and breasts are removed, and the remains are put in the device. The liquid it extracts is used to make a sauce with red wine and cognac. The dish evokes another time.

“It puts you somewhere that none of us have ever been,” says Beran.

It’s an entirely different, more traditional pressed duck than the one that gained him fame at his other restaurant, Dialogue, the two-year-old, Michelin-starred tasting menu concept hatched in a Santa Monica food court. “It is truly the classic version,” he says
of the Pasjoli dish.

Elaborately prepared fowl aside, the warmly lit, à la carte Pasjoli is more casual than Dialogue. Just don’t expect hearty staples like steak frites, but, rather, lighter seasonal dishes you might find at a modern Paris bistro, like marinated tuna wrapped in tomato.

“There’s a big misconception with French food, where it’s really heavy, and you can’t eat a lot of it because there’s so much cream and butter,” says Beran.

Yet while it’s more relaxed than Dialogue, it’s not cheap—at least at first glass. Most main courses are more than $45, and—gasp!—it’s suggested that diners order their own meals rather than share. But Beran notes the prices reflect that it’s a no-tipping (and no sneaky service fee) restaurant.

The chef realizes that he’s bucking dining trends with the new spot and that French entrees might be a hard sell in a town obsessed with small plates and Latin and Asian flavors, but he’s not deterred. The pressed duck sells out most nights—it seems the chef isn’t the only one with a hunger for the past.

Beran says: “We just built the restaurant that we wanted to go to.”