Home Internet How Papa Cristo Reinvented Himself as a Social Media Sensation to Keep... 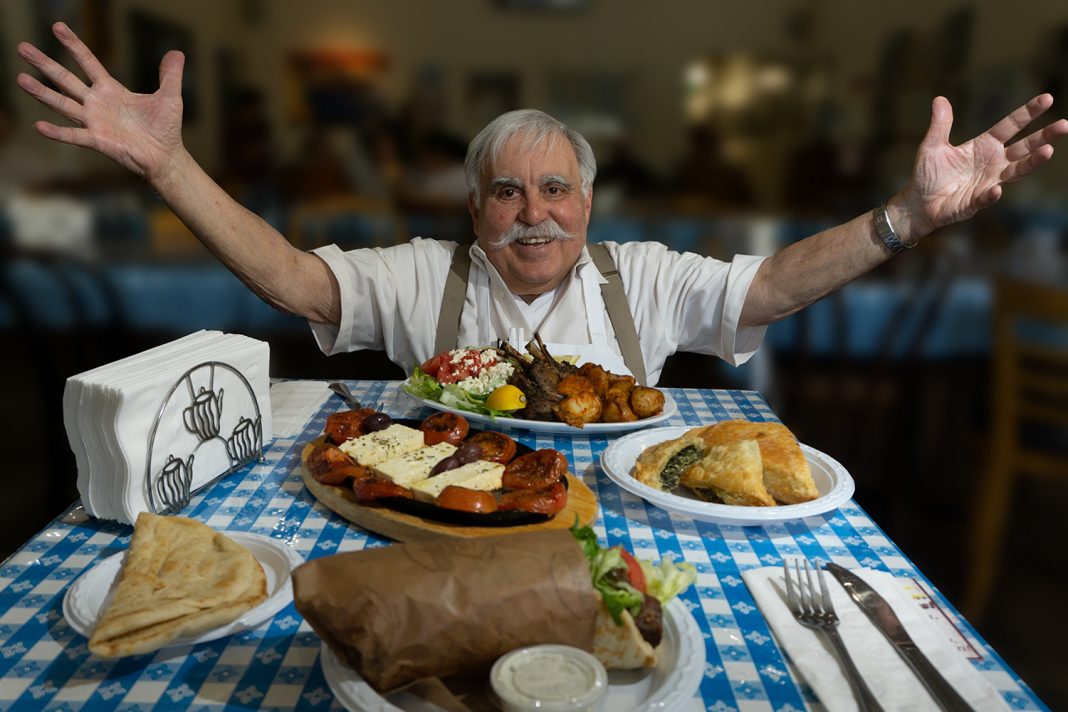 For a certain slice of the city’s social media mavens, the must-follow Instagrammer isn’t a Gen Z influencer or witty comedian, it’s a 74-year-old with a bushy mustache who runs an authentic Greek market and dining hall on West Pico Boulevard.  During a Friday lunch rush at Papa Cristo’s restaurant in Pico Union, Chrys Chrys, aka Papa Cristo, manned the grill while giving a cooking demonstration that was being recorded for his Facebook page and email newsletter. Chrys’s joie de vivre and passion for all things Greek (including his business) bursts forth on his social media accounts. Papa Cristo’s Instagram, with its steadily growing fan base, has more than 4,000 followers, including L.A. native Caroline Goldfarb, a writer for the upcoming TBS comedy Chad and creator of the popular Instagram account @officialseanpenn.

“He’s a Los Angeles icon,” Goldfarb says of Chrys. “For some people, they have Tupac or the Kardashians. For me, it’s Papa Cristo. I put him right up there with our city’s most iconic figures and hometown heroes. He’s so fun and mischievous.”

Chrys started posting on Facebook and Instagram eight years ago with the help of his daughter, Annie, to keep his restaurant and market, which has stood at the corner of Pico and Normandie Avenue since 1948, relevant and thriving.

“We’re a destination. I’m not on everyone’s way,” Chrys says. “As unique as this place is, if we don’t remind people we exist, it’ll be forgotten.”

Chrys took over the market, which was originally called C&K Importing, from his dad in the mid-’70s. His father passed away before Chrys added the restaurant in 1985.

“We’ve been a family business for seven decades—same address, same phone number,” he says. “If you have a 70-year-old business card from my dad and call the number, I’ll pick up the phone today.” Chrys’s exuberance comes across both online and offline. “I have fun making sure all of our produce looks right,” he says. “Look at my tomatoes,” he boasts. “They look like Greek tomatoes; they don’t look like restaurant tomatoes—because I have a Greek delivering this stuff.”

The entrepreneur has grown his business not just with the help of humorous social media posts, but also with a page stolen from the fast-food playbook. “I read that Carl’s Jr. throws their hamburger patties on the grill frozen,” he says. “It made me think, if they can do that, and the burgers still taste great, I can do that with spanakopita.” The experiment paid off: For more than a decade, Whole Foods, Erewhon, Mother’s, and a number of other major chains have carried Papa Cristo’s frozen spanakopita.

But it’s still best enjoyed at Papa Cristo’s, with its Mediterranean atmosphere—and the man himself. “Every day here is like the United Nations,” Chrys says, pointing at the diners. “You’ll see people of every ethnicity. People come in here and say, ‘I don’t want lamb.’ I’ll say, ‘What do you mean you don’t want lamb?’ I’ll give them a rack chop on top of their meal, and they’ll say, ‘I’ve never had anything like this. It’s amazing.’”

RELATED: How to Make the Famous LAUSD Coffee Cake