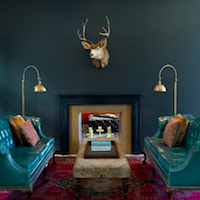 Six years ago, Palihouse West Hollywood opened its doors with a goal to give one of L.A.’s most popular neighborhoods some London chic. The French brasserie felt au courant at the time, and a minimalist patio was all the boutique hotel needed to offset tufted couches and faux taxidermy. Regulars and the ever-evolving West Hollywood crowd will be pleased to learn that the brand very quietly put the finishing touches on a surprising new update earlier this month.

Not only have the common areas and restaurant been updated and expanded, but new inside the Courtyard Brasserie kitchen is chef Mathew Woolf, who officially took over for chef Jonathan Peters in late December. Woolf began his culinary career at Claridges and the Ritz in London. (For fans of the royals, the chef’s resume also includes a stint cooking for the Queen at Buckingham Palace.) Woolf was most recently at Fig in Santa Monica and Gordon Ramsay’s Fat Cow at The Grove.