Home L.A. History Pacific Dining Car As We Knew it Is Gone 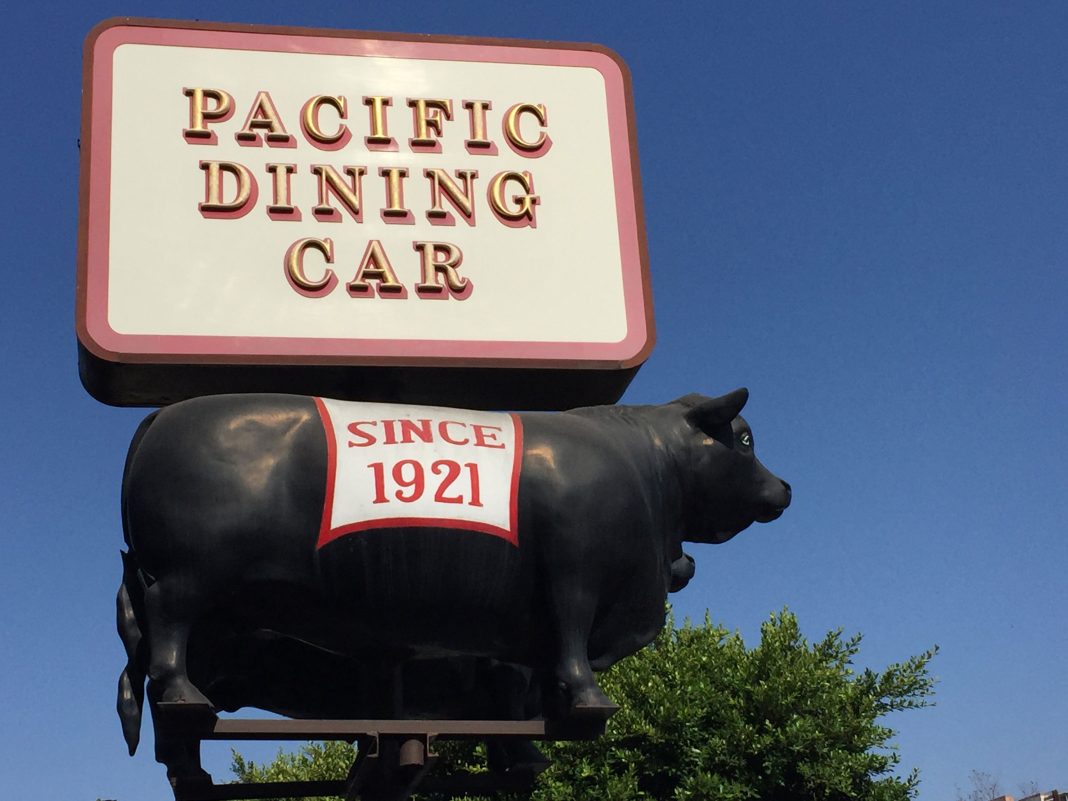 The end of the Pacific Dining Car came with a few mouse clicks this week as the final bids were entered on the leather booths, fine china, and crystal goblets inside the landmark restaurant. Ninety nine years ago, Fred and Grace “Lovey” Cook started serving up meals just outside of downtown in a replica railroad car. Over four generations, the food got better, the wines got fancier, and the Dining Car expanded into a dim and sprawling, elegant oasis that never closed. It was a refuge for movie stars and politicians looking for a comfortable night out in a place where old-fashioned rules of decorum still applied. Los Angeles magazine raved about the restaurant for decades, and once named it one of the 101 Greatest Things About L.A. Our former food critic Jonathan Gold wrote that at the Dining Car, he “feasted on a prime dry-aged New York strip steak with the magnificent sour ripeness of a runny French St. Nectaire.”

While much of the kitchen equipment and plush décor (including the contents of a sister restaurant in Santa Monica) have been sold at auction, Cook’s great-grandson Wes Idol III does a good job convincing us that the restaurant is simply taking a nap during the pandemic and will return someday. “I have zero interest in having my family’s legacy go away,” Idol told us from his home in Calabasas this week. “There’s something very productive in a pause.”

The last crate of Dining Car relish and jam sold for $535, A wooden plaque for the “Club Car” sold for $5,025, and the restaurant’s curbside sign, two life-size steers that stood over 6th Street and Witmer Avenue for decades, fetched $7,250. “The whole physical space is on hold,” he says. “There’s going to be a large redecoration and renovation anyway, It’s really not as dramatic as it seems.” Idol removed photos and artifacts of personal or historical interest before the sale and insists that everything in the auction needed to be replaced anyway.

Whatever the interior looks like, it may involve more room for aging beef. Idol plans to use the restaurant building, which his family owns, for a new venture at the original location. Starting sometime between Thanksgiving and Christmas, Pacific Dining Car will be selling frozen steaks online. Idol speculates on a whole line of future food products. If things go well, macaroni and cheese, creamed spinach, and potato souffle could also come back, in to-go form. “This is not the end of anything,” he says. “This is the beginning of something.” The restaurant needs to work out new supply chains and age the prime beef for up to two months (Idol claims his great grandfather introduced dry aged beef to Los Angeles) before offering a kit with easy-to-follow cooking instructions that Idol says “a college student with a hotplate” could follow.

The fourth-generation owner remembers a visit to a museum with his father, who passed away last year, where he spotted the Remington logo on an antique bicycle. The curator explained how the famous rifle company got their start manufacturing bikes. “How’s that for adapting?” his father said at the time. “This is personal. This is my family,” Idol says. “One of my main drivers is keeping Pacific Dining Car alive and going into the future. This is the pivot we’re going to do.”

Idol has worked every job in the restaurant, from busboy, to IT, to maître d’. Having spent decades seating warring politicians away from each other has taught him diplomacy, so he won’t take sides, but you can tell he’s not a fan of the regulations that closed his business. “Much of the state has been gutted,” he says. “Many of my peers would like to see our mayor and governor hung out to dry. They both have my sympathy, but the industry feels far more cantankerous.”

While I can’t imagine the Dining Car’s coddled customers finding the same pleasure grilling their own steaks and mixing their own martinis, perhaps some inhabit their own cozy labyrinth with overstuffed chairs and tuxedoed staff around every corner. Sure, the food at the Dining Car was great, but the experience was all about the service and the environment. Idol remembered “My dad used to say, ‘People may not remember what you do or say, but they’ll never forget how you make them feel.’”

RELATED: L.A. Restaurants That Have Closed Amid the Pandemic: Dominique Ansel Bakery, Preux & Proper, and More