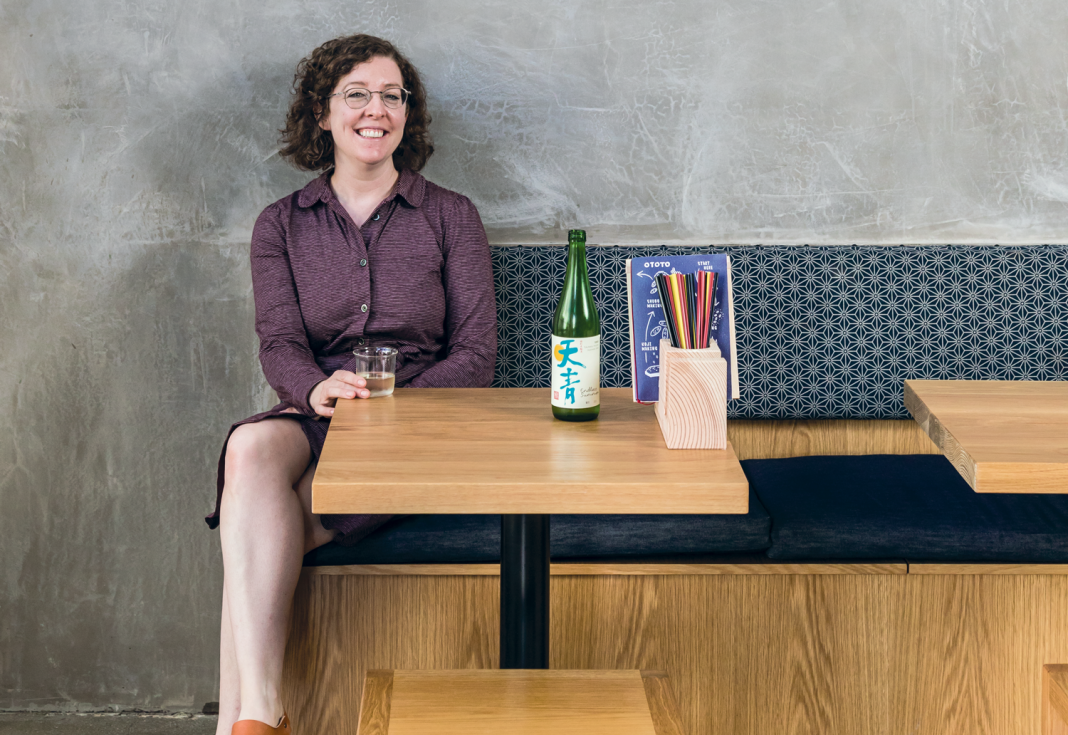 “I know the words ‘sake bar’ can come with some baggage,” says Courtney Kaplan, the beverage wiz behind the hit Japanese restaurant Tsubaki in Echo Park. “But this one is going to be fun, I promise.” Along with her partner in business and life, chef Charles Namba, Kaplan is on a mission to upend stuffy stereotypes about Japan’s traditional rice wine at the couple’s newest venture, Ototo, which opened in late May.

Located next door to Tsubaki, Ototo (Japanese for “little brother”) serves as a more casual counterpoint to its sibling, with an emphasis on sake, wine, beer, and requisite drinking snacks. “The goal is to hang out and treat it like a regular bar,” Kaplan says. “We want to do what wine bars did for democratizing wine, making it more accessible and fun.”

The barrier, as she sees it, is that even people who like sake often don’t know much about it. Ototo aims to reduce the intimidation factor. That means freely pouring tastes from the list of 50-plus bottles and writing menu descriptions that balance info with entertainment. “We’re not too bogged down in jargon about rice polishes or sake grades,” Kaplan says. “I want people to feel a sense of adventure when they take a sip.”

That said, there’s plenty for sake nerds to dig into. “Sake often gets pigeonholed—most people experience a very specific style—and I want to show how broad it can be,” she says. As savvy drinkers continue to seek the story behind what they imbibe, she sees an opportunity to push sake into the spotlight. She’s particularly excited about showcasing varieties like Fukucho, a sake crafted in Hiroshima by a female master brewer who single-handedly revived an extinct heirloom rice breed over the course of a decade. There’s also “young, hipster-style” sakes like the Takachiyo 59 series, which consists of three identical sakes, each made with a different type of rice. The beverage menu is rounded out by shochu (a distilled grain liquor), natural wines from the U.S. (in contrast to Tsubaki’s all-French list next door), and craft beer, including a possible collaboration with Eagle Rock Brewery.

In terms of food, sake is a natural pairing for savory, umami-heavy foods and, according to Kaplan, offers far more flexibility than wine. Namba is developing a snack-oriented menu with dishes like oden, a comforting simmered stew of sorts; a katsu-style fried-chicken sandwich; and the gloriously decadent griddled cabbage pancake okonomiyaki. Oh, and cheese, which Kaplan notes is a natural foil for sake, because both contain high amounts of amino acids and glutamates. (Other foods with a similar makeup include oysters and tomatoes, which means “pizza is a fantastic sake pairing, too.”)

The idea at Ototo is to offer something for everyone and maybe broaden horizons in the process. “If you’re waiting for a table at Tsubaki, you can come next door and have a drink and a quick snack; you can drop in for a glass of sake before a Dodgers game; or you can make a night of it here,” Kaplan says. “It’s a flexible spot for the neighborhood.”